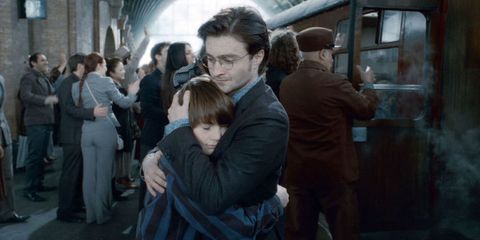 Pottermore just released the plot line of the eighth official story in the Harry Potter series, the Cursed Child poster, *and* the ticket release date for the play. So best Friday ever, right?

"It was always difficult being Harry Potter and it isn't much easier now that he is an overworked employee of the Ministry of Magic, a husband and father of three school-age children. While Harry grapples with a past that refuses to stay where it belongs, his youngest son Albus must struggle with the weight of a family legacy he never wanted. As past and present fuse ominously, both father and son learn the uncomfortable truth: sometimes, darkness comes from unexpected places."

Some things: Voldemort is gone, so what is causing "the darkness"? Why isn't James involved in any of this? And who is returning from Harry's past? Malfoy? A retired Death Eater? All the questions.

The artwork for the play has also been released, featuring a small boy (who looks just like Albus) sitting in a bird's nest with black wings.

Throw a chair because you won't see anything else (internet willing) until next summer when the two-part play hits stages at the Palace Theatre in London. Tickets go on sale Wednesday October 28 to anyone who registered for priority booking and on Friday October 30 to the general public. No word yet if/when it'll come to the U.S., but like, pretty please?