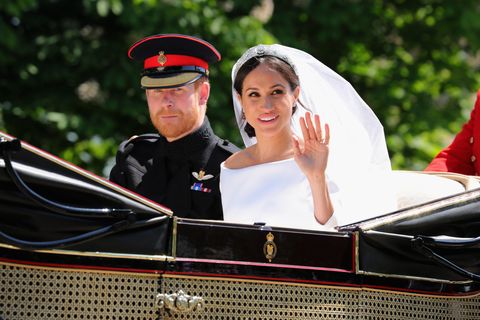 This morning, Meghan Markle and Prince Harry were photographed leaving Windsor Castle (where they spent their first night as a married couple) to head home to Kensington Palace in London, which means the Royal Wedding weekend is officially over. (Sad!) Meghan appeared to be wearing a white blouse with a blazer over it, while Harry wore a button-down and a suit jacket:

The newlyweds left this morning after the Queen returned from church service, Hello reports, which makes them basically like every other couple who politely waits for their grandmother to return from whatever early morning activity she's doing to thank her for hosting them for the weekend before leaving—except in this case it was for hosting a humongous royal wedding at her house, but you know.

The couple weren't the only royals spotted making their way back to London today: Prince William and Kate Middleton were photographed driving home from Windsor Castle this morning as well. Both Will and Kate wore sunglasses and looked to be in good spirits after the weekend's events, which included Harry and Meghan's private wedding reception last night where William reportedly gave a "naughty" toast to his brother in front of the 200 guests in attendance.

No word on whether Prince George and Princess Charlotte were in the car with their mom and dad or if they left Windsor Saturday afternoon and skipped out on the evening festivities.

The royal fun isn't completely over, however—unlike Will and Kate who left for their honeymoon directly after their wedding in 2011, Meghan and Harry are delaying their post-wedding travels so they can be in town with his family this week. The two will attend a garden party this Tuesday, May 22 for the Prince of Wales' 70th Birthday Patronage Celebration. The Queen is throwing the shindig for her son and to honor the many charities he's worked closely with throughout the years.

So! This is all good news for those of us already suffering from Royal Wedding withdrawal. And now we have two whole days to wonder: WHAT HAT WILL THE DUCHESS OF SUSSEX WEAR TO HER FIRST GARDEN PARTY?!

Related Stories
Gossip From Meghan and Harry's Wedding Reception
This Is How Meghan Markle Honored Princess Diana
See What Meghan Changed Into After the Ceremony
This content is created and maintained by a third party, and imported onto this page to help users provide their email addresses. You may be able to find more information about this and similar content at piano.io
Advertisement - Continue Reading Below
More From Culture
'Behind Her Eyes': Is Astral Projection Real?
The Book-to-Movie Adaptations to Catch This Year
Advertisement - Continue Reading Below
The Best Easter Egg in 'Behind Her Eyes'
Breaking Down the Ending of 'Ginny & Georgia'
68 Movies That Are Just Fully About Sex
Could 'WandaVision' Get a Second Season?
Is Wellsbury From 'Ginny & Georgia' a Real Place?
People Have a Lot of Feelings About 'I Care a Lot'
The World According to Billie
Will There Be a Season 2 of 'The Queen's Gambit'?