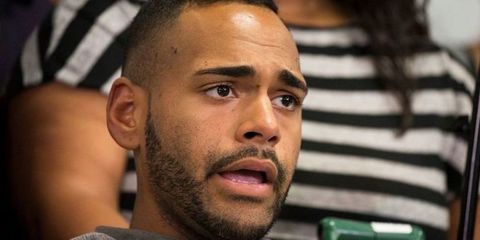 Survivors of the mass shooting at a gay club in Orlando, Florida, last weekend are starting to share their stories of just how terrifying it was to be inside Pulse early Sunday morning.

According to CNN, Angel Colon was saying his goodbyes to friends when he first heard a shotgun, and everyone in the club began running for the door. During the stampede, he was shot three times in the leg and fell down.

"Everyone started running everywhere, I got trampled over, and I shattered and broke my bones on my left leg," he said during a press conference at the Orlando Regional Medical Center. "By this time, I couldn't walk at all. All I could do was just lay down while everyone was just running on top of me, trying to get to where they had to be."

Surrounded by his friends and family at the hospital, Colon recounted hearing gunshots and screaming, and said that the shooter briefly left the main room but soon after returned.

"He's shooting everyone that's already dead on the floor, making sure they're dead," he said. "I'm able to peek over, and I can just see him shooting at everyone. And I can hear the shotgun's closer, and I look over, and he shoots the girl next to me. And I'm just there laying down and I'm thinking 'I'm next, I'm dead.'"

"So I don't know how, but by the glory of God, he shoots toward my head but it hits my hand, and then he shoots me again and it hits the side of my hip," he continued. "I had no reaction. I was just prepared to just stay there laying down so he won't know that I'm alive."

According to Colon, the shooter continued doing this for another five to ten minutes, until police arrived and began exchanging gunfire with him. One officer discovered Colon was still alive, and, unable to walk, Colon had to be dragged through broken glass in order to get him outside to safety.

"I wish I could remember his face or his name," Colon said. "Because, to this day, I'm grateful for him."

This content is created and maintained by a third party, and imported onto this page to help users provide their email addresses. You may be able to find more information about this and similar content at piano.io
Advertisement - Continue Reading Below
More From Culture
Hunter Schafer on Playing Jules in 'Euphoria'
Listen to the Best New Love Songs of 2021 (So Far)
Advertisement - Continue Reading Below
'Bachelor In Paradise' 2021: Everything We Know
Meet the Cast of 'Too Hot to Handle' Season 2
Meet the Cast of Katie's 'Bachelorette' Season
Simone Biles: "Don't Be Ashamed of Being Great"
68 Movies That Are Just Fully About Sex
Everybody Loves Annie
The Beachiest Beach Reads of All Time
This Summer, Let's Escape