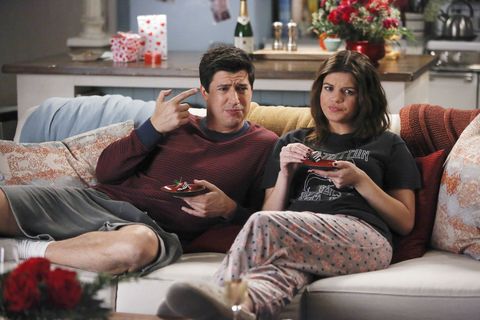 "Men have anger." That's a phrase my dad used to say to me whenever he had a random tantrum over losing his keys or an altercation with a meter maid. He would say it casually, after whatever incident had run its course. After, say, I was still struggling to process why my dad had, in short succession: sped in front of a driver who had cut him off, only to then stop short, blocking the other driver from getting away, turned off his ignition, rolled down the window, and dangled his keys out of it as if to declare, "You wanna keep honking, we'll just keep sitting here."

I've thought about this a lot as I've grown up and the conclusion I've come to is that:

At least I do. Here are things I have done in crazed fury, in no particular order:

When I was a waitress and a man tipped me in pennies, I addressed the entire restaurant and pointed at his wife and announced: "I just had to spend an hour, but I'm so sorry you have to spend a lifetime with him."

I tripped my college roommate after I overheard her say she didn't think I was "fun."

At sixteen, when my parents told me I couldn't go out, I pulled two heavy brass sconces out of the wall by hanging from them, leaving only dangling wires in my wake.

I have seriously contemplated driving my car through my home for "effect."

And yet I seem so mild mannered and sweet on the surface. But just underneath, I'm seething.

I didn't always label it as anger. My dad says as a child I was "challenging." A "handful," raved my grandfather. "Emotional," enthused my aunt Ann. I paid no attention to my mom's dog-eared copy of Raising Your Spirited Child. I was too busy firing the fellow nine-year-olds in our neighborhood who hadn't learned their lines for my backyard production of Cats: The Sequel (rights pending).

I didn't always label it as anger.

My parents begged me to go easy on Amy. Her parents had recently gotten divorced, and her dad was living on a houseboat. Did I have to use the word fired? Couldn't she havesome part? "Fine!" I yelled. "She can play the telephone." Amy would go on to dazzle the citizens of Alexandria, Virginia, with how long she could remain crouched down stage right with her arm draped over her head as the human receiver and allow me to talk on her. I had — naturally — replaced her in the starring role. Anger, I realized, could mean power.

It could also be exciting. I grew up in a spectacularly heightened household where joy and anger mingled seamlessly. My parents were highly successful, funny, passionate people who taught me life should be lived out loud and all big feelings felt. My mom once tried to throw a dining-room chair at my dad's head, and I barely looked up from Mr. Popper's Penguins. My dad was arrested for screaming at a maître d' because they wouldn't seat an elderly woman. Later, she told my dad that while she was grateful he had stuck up for a stranger, they hadn't seated her because she was waiting for someone. (Oops.)

I'm positive we all went to the movies after both incidents as if nothing had happened. Popcorn and a dark theater: a great post-rage landing spot for our family, even if my mom was often asked to leave for laughing too loudly. Which also made her furious. "We're Italian," she explained with a shrug.

She called it "Italian"; my now-husband called it "actress" when we were dating. And as an actress, anger had actually served me fairly well, as it can be galvanizing and motivating. But I just wasn't sure what I was so angry about. It wasn't a constant state of being — in general I am quite upbeat. Rather, it felt like a tidal wave waiting in the wings that threatened everything in its path. I had no control over it. Did I want to yell to a woman at a Beverly Hills salon who was rude to the valet "YOU ARE DRENCHED IN ENTITLEMENT!!!" Did I want to pen "newsletters" for my neighborhood shaming a male neighbor who wrote me a nasty note on my parking job? Why, yes I did! I thought I was a vigilante! Others thought I was unmoored.

And it's not just strangers who would get the brunt of my thrice-yearly explosions. It was well-meaning boyfriends who wondered why we couldn't just "sleep on it and talk calmly in the morning?" Because I wanted to scream on it now! My prized girlfriends were patient, but I still have deep regret over the few times I turned my acid tongue on them. I think it was because I always felt like they could handle it (and they could), but they shouldn't have had to.

I've realized that anger doesn't seem to be as palatable on a woman as it is on a man. And I'm angry about that. I'm angry at women who can't access their anger, or who cover it by masquerading as little sweeties, or those who display it and are off-putting. Which are all versions of myself I have spent my life trying to wrangle and negotiate.

I've realized that anger doesn't seem to be as palatable on a woman as it is on a man.

Even as I acknowledged that there's a degree of sexism in the way the world treats an angry woman, as I got older, I started realizing my outbursts were causing real problems. For starters, I lost a lot of phones. Whenever I would feel a flash of white-hot rage overtake me, my first impulse was always the same. To throw my phone. My phone! My very lifeblood! No available slab of drywall was safe.

Over the years, I have thrown a Mountain Dew pager out the window of my boyfriend's car on the highway en route to Rehoboth Beach. I've smashed my beloved bedazzled Sidekick into my dressing-room mirror at SNL and left a trail of crushed BlackBerrys in every shitty apartment complex in LA. I have thrown my iPhone only once, in a tequila-fueled moment (but between us, I knew I had an upgrade coming).

In the moment, these eruptions felt fantastic. Nay, important. But afterward, I started feeling disproportionately upset about my behavior, and it then became about the emotional hangover the anger wrought. Where was this all coming from? I got into therapy with the hopes of figuring it out. It's too boring to blame everything on our moms, but I wonder if, maybe, the conservative wave of the early '80s is something I can blame?

In the moment, these eruptions felt fantastic.

My mom was the president of the National Women's Political Caucus (an organization devoted to getting women elected) for the first several years of my life. I wonder if growing up with a mother who was so angry at the state of things she wore a pro-choice sticker while eight months pregnant with me played a role. She raised me to believe I could be anything I wanted to be. Which was liberating and wonderful. But perhaps this combination had me feeling a little too free to be me. I had become a subway ad: if I saw something, I said something. It wasn't a good look, but no amount of therapy or meditation (my mantra made me EVEN. ANGRIER.) or astrology retreats (I'm a Scorpio, doy) seemed to help with this particular issue. I couldn't get a handle on it.

Surprisingly, the things that ended up helping me the most are arguably the things I have the most reason to be angry about. I was not asked back to Saturday Night Live. My long-term relationship ended poorly. My mom passed away. And yet when I received my things in a brown box from SNL and saw that bottles of alcohol had been thrown in with photos of my mom and everything had exploded all over, I didn't feel angry. I felt sad. When the former boyfriend declined my invitation to meet for coffee years later so I could apologize, I just felt deep regret. And when the woman who did my mom's makeup for her funeral came up to me in the receiving line and asked if she could grab the number of the doctor who had done my mom's eye lift ... I laughed. And gave it to her.

In the realization that life is ever tenuous, I suddenly became less angry. I found such joy in my work. I got married. I had a baby. Now, please note, I'm still an angry bird, to be sure. But now I'm acutely aware that things and jobs and people come ... and go. And I can't afford to destroy what and whom I have.

I'm now aware of the pause. The pause between one state of being and another. It's just amoment. Between life and death. Between when the phone rings and when you say hello. Between feeling and action. Loss has given me a deep awareness of that pause, and in taking it, I have finally been able to harness my anger. Or at least manage it. And take a breath. Before I look for my phone. To either throw it ... or call my husband and see if he wants to go to the movies.

Casey Wilson is an actress and writer from Happy Endings, Marry Me, and Gone Girl and cohosts the podcast Bitch Sesh.