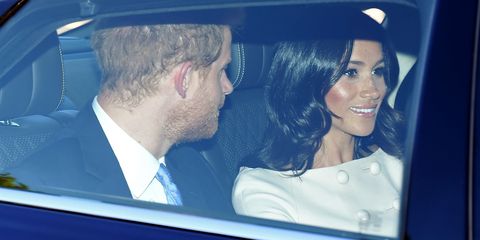 Meghan Markle is attending her first-ever Young Leaders Awards—an annual event at Buckingham Palace since 2014 that reflects the Queen's (and now Meghan's) commitment to the lifelong service of the Commonwealth.

The Duchess of Sussex looked gorgeous in a peach two-piece Prada outfit alongside Prince Harry who wore his signature blue suit. For her last event at the Royal Ascot races, Meghan wore a belted Givenchy white shirt dress—a much different look than she wore tonight.

The Commonwealth is a global network of 53 countries and 2.4 billion people, most of whom are under 30 years old. Meghan became a Commonwealth Youth Ambassador a month before she married Prince Harry in May and tonight she's helping to honor the young men and women making an impact in their communities. It's a pretty big deal that she received this title before she officially became a royal, which shows the Queen's trust and pride in her.

This event marks the third time in a month that Meghan and the Queen have attended events together. Meghan traveled solo with the Queen to Cheshire on June 14 where they opened the new Mersey Gateway Bridge and the Storyhouse Theater about a half hour away. A few days later, they both went to the Royal Ascot 2018 (this time, Prince Harry was there) and had a fun day watching the horse races.

It's the big day! The 2018 #QueensYoungLeaders will be receiving their awards from Her Majesty The Queen at a special Ceremony this evening. 🎉🎉🎉 pic.twitter.com/Nq4qL5ahuz

The Young Leaders Awards will be the first of many events where Meghan will work with young people across the Commonwealth to better serve their communities and honor those who do. You can learn more about the Queen's Young Leaders program below and watch a livestream of the event here.

This content is imported from YouTube. You may be able to find the same content in another format, or you may be able to find more information, at their web site.
50 ) { obj.snippet.title = obj.snippet.title.substring( 0, 50 ) + "..."; } %>
Related Stories
Shop Every One of Meghan Markle's Best Looks
Meghan Markle Is Nominated for a Teen Choice Award
Rachel Epstein Associate Digital Editor Rachel Epstein is the associate editor at Marie Claire, where she covers culture, lifestyle, and politics.
This content is created and maintained by a third party, and imported onto this page to help users provide their email addresses. You may be able to find more information about this and similar content at piano.io
Advertisement - Continue Reading Below
More From The Ultimate Guide to the Royal Family
Harry Plans to Fly Archie Around in a Helicopter
Harry & Meghan's Speaking Demands Could Cost Them
Advertisement - Continue Reading Below
Will & Kate Skipped Harry's Birthday Zoom Call
Why Harry & Meghan Signed Their Netflix Deal
Jessica Mulroney Says Meghan Is Her "Family"
Meghan Markle Pays Tribute to Ruth Bader Ginsburg
The Queen's Private Pain After Diana's Death
William Isn't Happy About Harry's Netflix Deal
Meghan & Harry Make Huge Donation for His B-day
Meghan Could *Possibly* Go Into Politics