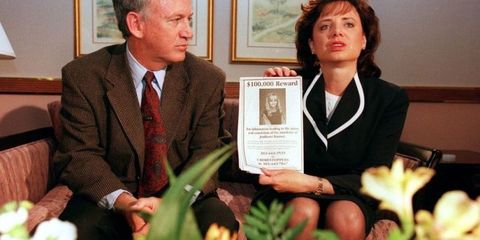 On Dec. 26, 1996, child beauty pageant queen JonBenét Ramsey was found brutally murdered in the basement of her family's home in Boulder, Colorado. The case has since become one of the country's most enduring unsolved murders, and with the 20th anniversary of the 6-year-old's death coming up, her family's search for answers continues.

With quite a few TV projects and documentaries about the murder set to premiere this month, here are just some of the things you should know about the crime and its aftermath.

After JonBenét's mother Patsy discovered a ransom note (more on this later) early on the morning of Dec. 26, the Ramseys called police. JonBenét father, John Ramsey, later discovered her body tied up and covered with a blanket during a search of the house, in the family's wine cellar. She had a nylon cord around her neck and duct tape over her mouth, along with various wounds on her face and back. Prior to being strangled, JonBenét had been hit in the head with an unknown object with enough force to knock her unconscious. The official cause of death was asphyxiation by strangulation, but police believe she would have eventually died because of the head injury.

While there was also evidence of vaginal trauma, it was inconclusive—and in a 2015 Reddit AMA, former Boulder police chief Mark Beckner said, "The rest of the scene we believe was staged, including the vaginal trauma, to make it look like a kidnapping/assault gone bad."

When Patsy Ramsey called police, she said that she'd discovered her daughter was missing after finding a 2 1/2-page ransom letter on the staircase. The letter, addressed to John Ramsey, demanded that he withdraw $118,000—almost the exact amount of a bonus he'd received earlier that year — and await further instructions. The letter specified that if the family contacted police or told anyone of JonBenét's disappearance, she would immediately be murdered.

It was later determined that the note had been written on paper from a writing pad in the family's home. A handwriting test cleared John Ramsey and other family members of suspicion, but Patsy Ramsey's writing samples immediately "set off alarm bells." Police could not conclusively determine if Patsy had written the letter, but analysts have said the letter was "unusual" compared to normal ransom letters due to its length and the specificity of the amount asked for.

The Boulder Police Department has faced a ton of criticism for their handling of the case. This is in large part because, it's believed, they were so focused on proving that the Ramseys were guilty of JonBenét's murder that they neglected to thoroughly investigate other leads. Furthermore, as Beckner explained, the crime scene wasn't properly sealed off after police arrived, and unauthorized individuals—including friends and family—were allowed to enter and leave the house before the initial investigation was complete. Evidence is thus believed to have been compromised, and the case was ultimately passed to the district attorney's office in 2002 because "the Ramsey family had no confidence in the police."

In the 20 years since JonBenét was murdered, there have been over 140 suspects investigated by police. Until 2008, authorities largely focused their efforts on the beauty queen's parents and her brother, Burke, who was 9 years old at the time of her death. In fact, a grand jury voted to indict Patsy and John Ramsey for abuse in 1999, but the judge refused to sign the indictment because there wasn't sufficient evidence to prove it beyond doubt. The Ramsey family was later cleared of all suspicion because DNA found on JonBenét's leggings and underwear did not match anyone of relation to her.

Other prime suspects included Bill McReynolds and Michael Helgoth, who were both eventually cleared of all suspicion. The former was a local Santa Claus who had visited the Ramsey house a couple days before JonBenét's death, and, by coincidence, whose daughter had been kidnapped 22 years before. The latter was a "favorite" suspect of volunteer and private investigators due to his suspicious behavior surrounding the murder.

In 2006, John Mark Karr, a schoolteacher living in Thailand, confessed to JonBenét's murder and was brought back to the U.S. to be arrested. However, less than two weeks later, police discovered that his DNA did not match with what was found on JonBenét's clothing, and he was released.

One of the most contentious debates in the investigation has been whether it's possible that JonBenét was murdered by an intruder. A basement window had been broken and an unidentified footprint was found at the crime scene, but the physical evidence—including undisturbed cobwebs—seemed to suggest those details were part of a set-up. However, ever since the case was reopened in 2009, police have started revisiting the intruder theory as a possible option.