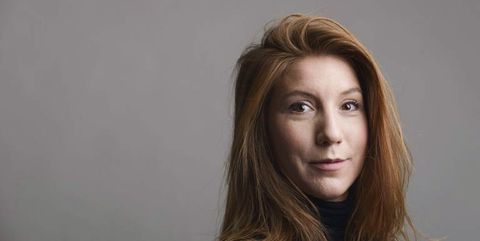 Almost two weeks after the disappearance of 30-year-old journalist Kim Wall, police believe they are close to finding out exactly what happened to her.

Wall was a freelance journalist who had written for the likes of The New York Times, Vice, and more. Earlier this month, she was working on a story about 46-year-old Peter Madsen, a self-taught submarine and rocket maker from Denmark who crowdfunded the money he used for his projects.

On August 10, the journalist boarded Madsen's 40-ton, UC3 Nautilus submarine in Copenhagen as part of her research, for what should have been a "short trip," the BBC reports. But when she failed to return home that night, her boyfriend grew concerned and reported her missing to the police.

A rescue operation was triggered in an attempt to search for the submarine, which was not fitted with a tracking device, and various sitings were reported later that night and the following day. At 11 a.m. Friday, August 11, the submarine sank, and the BBC reports that police believe this was a "deliberate" act by Madsen.

When officials retrieved the vessel from the water, Copenhagen police investigator Jens Moller Jensen said at a press conference: "The sub has been searched and there is nobody on board—neither dead nor alive."

Peter Madsen had also been rescued from Koge Bay, the body of water where the submarine was found, but there was no sign of Kim whatsoever.

As you can imagine, police instantly zoned in on Madsen as a suspect. He initially insisted that the journalist had safely disembarked the submarine prior to its sinking, claiming he'd dropped Kim off "after dark" at the Halvandet restaurant, which was owned and run by her boyfriend Bo Peterson. Peterson, however, doubted that his girlfriend had ever reached the restaurant, and told Sweden's Express newspaper that he had handed over all CCTV footage from the cameras that surrounded the restaurant to police.

Meanwhile, Kim's friends grew increasingly worried about her whereabouts, and posted on social media in an attempt to find out what had happened to her.

Despite Madsen's insistence that he didn't know what had happened to Kim, police suspicion grew, and he was held on charges of negligent manslaughter. But since his initial statement, Madsen has gone back and changed his story to something much more revealing.

Now, the amateur engineer claims that Ms. Wall died as a result of an "accident" on board the submarine—though no details have been made publicly available as to exactly what the sequence of events was—and he revealed he'd buried her body at sea. Her body, CNN reports that Madsen told a closed-court hearing, was left in an "unspecified place" in Koge Bay.

Peter Madsen's lawyer, Betina Hald Engmark, insists her client's change of story does not admit any wrongdoing. "My client has not confessed to anything, my client still pleads not guilty to the charges against him," she said.

But in a sad new development, a body which was discovered recently on the shore of Koge Bay, south of Copenhagen, has been identified as that of Kim Wall. The headless torso was discovered by a passing cyclist, and lead investigator Jens Moller Jensenconfirmed there was a "DNA match between [the] torso and Kim Wall."

The rest of her body has not yet been discovered.

The BBC reports the torso had been "mutilated in an apparent attempt to ensure that decomposition gases passed out of the body," and that metal had also been attached in order for it to sink. The police confirmed blood found on the submarine was a match for Ms Wall, too.

So while there are still a lot of questions surrounding what actually happened on the submarine for Kim Wall's life to have come to such a premature and seemingly violent end, at least for her family and loved ones they have some initial answers.

Catriona Harvey-Jenner Digital Features Editor Cat is Cosmopolitan UK's features editor covering women's issues, health and current affairs.
This content is created and maintained by a third party, and imported onto this page to help users provide their email addresses. You may be able to find more information about this and similar content at piano.io
Advertisement - Continue Reading Below
More From Culture
'You' Season 3 Is Adding a Menacing Character
'Fate: The Winx Saga' Season 2: Everything We Know
Advertisement - Continue Reading Below
Who Is Michelle Young on 'The Bachelor'?
Who Is the Voice on the Radio in 'WandaVision'?
Everything We Know About Matt James
How to Join Marie Claire's Virtual Book Club
Watch UCLA Gymnast Nia Dennis' Epic Floor Routine
Fans React to 'Euphoria' Special 'Part Two: Jules'
'Detransition, Baby' Is Our Feb Book Club Pick
'The Bachelor' Is Back!