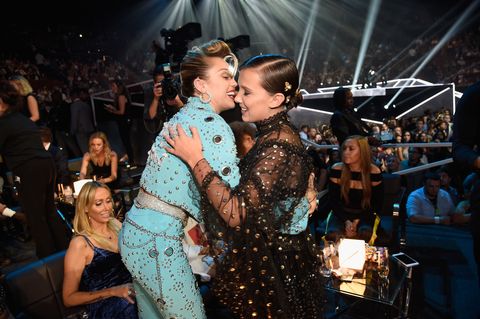 1. Jared Leto white girl dancing to Ed Sheeran's "Shape of You." I have so many questions about literally everything happening in this video.

who are you at the VMA's? I'm Jared Leto dancing along to "Shape of You" in a glittery cape: pic.twitter.com/KJmUwt0s34

2. Jack Antonoff eating a banana in the audience. Instantly iconic.

me RT @accesshollywood: .@jackantonoff eating a banana in the middle of the #VMAs is kind of iconic pic.twitter.com/rm1orGwMqp

Austin Swift thought so too:

3. Ellen Degeneres KINDA knowing the lyrics to "Shape of You." I mean, she's definitely having fun, and she SORTA knows the lyrics. Same, Ellen. Same.

Also, Ellen is just being amazing all evening. She looks confused, as most of us are, and mouthing things to Portia, and I am dying to know what she's saying.

I lost pop culture when it became cool to look ugly. Can we just keep the camera on Ellen & Portia? I don’t know who anyone is.

4. Vanessa Hudgens dancing in the audience just like you would have. Vanessa is channeling all of us in her red emoji dress and chair dancing.

5. Just so many Trump disses. They're coming fast and furious from host Katy Perry and then Paris Jackson gave us this YUGE impression:

7. Ed Sheeran being the most bored during Fifth Harmony's performance. He's like... whatever. 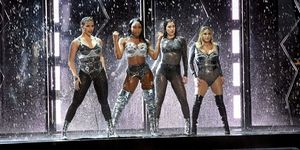 Fifth Harmony Did THAT at Their VMAs Performance 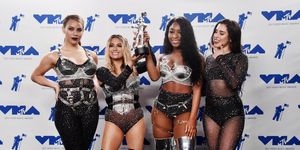 Laura Beck Laura Beck is a Los Angeles-based TV writer and frequent contributor to Cosmopolitan.com — her work has appeared in the New York Times, New Yorker, Jezebel, and the Village Voice.
Advertisement - Continue Reading Below
More From Video Music Awards 2020
Everyone Dressed Down for the VMAs After-Party
Sophie T and T Swift Wanted a Camila/Shawn Kiss
Advertisement - Continue Reading Below
Miley Cyrus' New Breakup Tattoo
Kaitlynn Carter Attended the VMAs with Miley
Bella and Gigi Hadid Both Are Blondes at the VMAs
Taylor Swift Calls Out the White House at VMAs
Camila and Shawn Had a Steamy VMAs Performance
Twitter Reacts to Missy Elliott's VMAs Performance
People Are Roasting Taylor Swift for Her VMAs Act
Halsey Wore Rainbow Roots to the 2019 VMAs