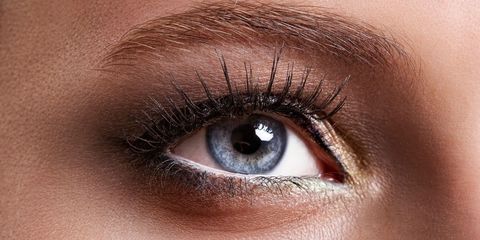 If you've got blue eyes, and the person you're in a relationship with also has blue eyes, give them a high five! Because you're basically related.

Okay, that sounds weird. You're probably not related in any kind of dodgy way, but it does turn out from new research that all blue-eyed people relate back to one common ancestor. That's kind of a weird thought.

I mean, you're probably so distantly related to your fellow blue-eyed loves that there aren't enough "cousin's brother's wife forty-five-times removed etc" descriptions in the world to accurately interpret it.

According to Tech Insider, the research reveals this famous blue-eyed founder would have lived anywhere between 6,000 and 10,000 years ago, and carried a mutated gene which caused the previously unheard of blue eye colour. From there, it's spread through DNA and now you'll find people all over the world who have bright blue peepers.

If you've got blue eyes, it means you possess a gene called HERC2. Rather than being a gene for blue pigment, what it actually does is switches off the OCA2 gene we all innately have, which determines how much brown pigment our eyes display. When this gene is switched off, that means there's no brown in a person's eyes at all, so they appear blue.

And what a delight it is to know that when you next see someone walking down the street with blue eyes, they're your family. A very, very, very distant member of your family, but family all the same.

Catriona Harvey-Jenner Digital Features Editor Cat is Cosmopolitan UK's features editor covering women's issues, health and current affairs.
This content is created and maintained by a third party, and imported onto this page to help users provide their email addresses. You may be able to find more information about this and similar content at piano.io
Advertisement - Continue Reading Below
More From Culture
A Guide to the Fairies of 'Fate: The Winx Saga'
'You' Season 3 Is Adding a Menacing Character
Advertisement - Continue Reading Below
'Fate: The Winx Saga' Season 2: Everything We Know
Who Is Michelle Young on 'The Bachelor'?
Who Is the Voice on the Radio in 'WandaVision'?
Everything We Know About Matt James
How to Join Marie Claire's Virtual Book Club
Watch UCLA Gymnast Nia Dennis' Epic Floor Routine
Fans React to 'Euphoria' Special 'Part Two: Jules'
'Detransition, Baby' Is Our Feb Book Club Pick