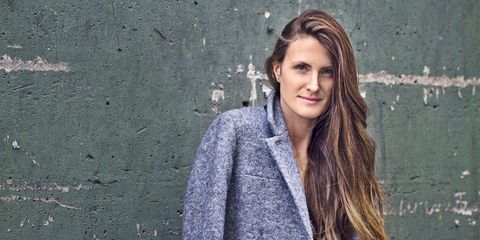 This isn't your traditional Power List. Spotlighted here are legions of impressive women operating largely behind the scenes, pulling levers and exercising outsize influence in their industries. They are the women you call when you want to launch something—be it a startup or a movement—these passionistas with the know-how to make anything happen. We call them The New Guard: The 50 Most Influential Women in America. Meet them. Learn from them. Then join them.

VP of Global Buying, Net-a-Porter
Age: 44 Bona Fides: Rutson rebranded Hong Kong–based Lane Crawford, then jumped to Net-a-Porter to head up global buying. All Eyes on Her: Can she help steer Net-a-Porter's merger with Yoox?

Founder and CEO, Reformation
Age: 38 Bona Fides: Disgusted with the waste in fashion—the industry is the second-largest consumer of water after the oil business—she launched Los Angeles–based, mid-priced Reformation as the casual- chic label that fashion's tree huggers have been itching for. Big-Name Backers: Taylor Swift Instagrammed her posse wearing a bunch of Reformation "Bill Murray" sweatshirts; supermodel Karlie Kloss is an investor. (@Yaya_Aflalo)

Casting Agent, Writer, Stylist, and Photographer
Age: 40 Bona Fides: After working for lensman Craig McDean, she struck out on her own and now boasts Lacoste, Chloé, and Max Mara as clients. Off-Hour Blogger: Tales of Endearment catalogs her passion for vintage fashion.

Cofounder, Spring
Age: 36 Bona Fides: With brothers Alan and David Tisch, she helped launch Spring as "the mall for your mobile phone," with one-click-to-buy for more than 800 brands from Marc Jacobs to Public School. Big-Name Backers: Over $30 million in funding from the likes of Josh Kushner's Thrive Capital, Bernard Arnault's investment arm, and Russian billionaire Yuri Milner. (@AraKatz)

Designer
Age: 30 Bona Fides: The former Oscar de la Renta intern cut her teeth with Lanvin's Alber Elbaz before launching her own eponymous label known for voluminous shapes and bold colors. On the Mantel: She nabbed the CFDA's Swarovski Award for womenswear this year—the fashion equivalent of an Oscar.

Cofounder and VP of Marketing & Operations, Nextdoor
Age: 45 Bona Fides: The former eBay exec helped launch Nextdoor, a network where neighborhood residents alert each other to hyper-local news (lost dog, water main break) and referrals. Bragging Rights: With over $200 million in funding, Nextdoor is valued at $1 billion, making it another of the Valley's so-called unicorns.

General Counsel, Thumbtack
Age: 37 Bona Fides: The former Romney lawyer logged time as senior counsel at Airbnb before bolting for the Valley's $100 million buzzy startup—now valued at $1.3 billion—which connects consumers to local service providers (plumbers, landscapers). Why She Matters: She's among a wave of D.C. operatives who've migrated out West, where their contacts and Capitol Hill know-how are among tech's most in-demand skill set. (@KatieBiber)

Cofounder and CEO, ClassPass
Age: 32 Bona Fides: The former Bain & Co. consultant was working for Warner Music Group when, frustrated she couldn't find a drop-in ballet class, she came up with her idea for unlimited access to local fitness classes for a monthly fee. Bragging Rights: More than 8 million classes have been booked in over 34 cities.

CEO, Human Ventures
Age: 32 Bona Fides: Hartnett runs this "startup studio," founded by successful ad-tech entrepreneur Joe Marchese; she and her (mostly female) team come up with the disruptive ideas, then recruit talent to launch them.

CEO, Theranos
Age: 31 Bona Fides: The Stanford dropout is the world's youngest self-made billionaire (net worth: $4.6 billion) thanks to her groundbreaking company, Theranos, which offers a faster, cheaper finger-prick blood test. It's now available at more than 50 clinics, health centers, and pharmacies nationwide, with plans for many more to come. How to Spot a Visionary: Like tech icons Steve Jobs and Mark Zuckerberg, Holmes sports her own trademark uniform: black turtleneck, black slacks, hair up. Très chic.

White House Social Secretary
Age: 37 Bona Fides: The former college dropout headed back to community college at age 29, landed a White House internship, and worked her way up to one of the nation's most storied positions. Only in America. Best Keepsake Ever: At a party in her honor, guests, including FLOTUS, gifted her a set of dice with a note reading, "Remember...You made your own luck."

Mayor, Compton, California
Age: 33 Bona Fides: The youngest mayor in the city's history is out to transform the former crime mecca into "the new Brooklyn." Bragging Rights: Amid salary controversy, she still brought unemployment down 5.2 percent and is helping the city avert bankruptcy. Smart Move: On the heels of this summer's NWA biopic, Straight Outta Compton, Brown scored a big donation from Dr. Dre for a new performing arts center. (@AjaLBrown)

Congresswoman, New York's 21st District
Age: 31 Bona Fides: The youngest woman ever elected to Congress is a former George W. Bush aide who led debate prep with Paul Ryan during the last presidential campaign. Why She Matters: Smart, likable, social-media savvy (and a woman)—Stefanik is the GOP's secret weapon. MC Predicts: A clutch prime-time spot during the Republican National Convention next July. (@EliseStefanik)

Director of Media Affairs, Speaker of the House John Boehner
Age: 29 Bona Fides: The former spokeswoman for the Ways and Means Republicans jumped ship to Boehner's office and this fall oversaw the Pope's landmark visit to the Capitol. (@Sarah_Swinehart)

Chief of Staff, Senator Tim Scott (R-SC)
Age: 37 Bona Fides: The sole African-American chief of staff in the Senate is a former prosecutor and a single mom. Hot-Button Issue: A prominent advocate for body cameras for cops, she's got her boss pushing for them, too.

Monica Escobedo
Age: 39 Bona Fides: With nearly two decades of experience, Good Morning America's music booker is responsible for lining up talent for the juggernaut. Among her big gets: JLO, Nicki Minaj and Taylor Swift.

EVP, Comedy Development & International Scripted, ABC
Age: 40 Bona Fides: The ABC vet is credited with engineering the network's comeback with gutsy hits like The Goldbergs, Black-ish, and Fresh Off the Boat. Inner Circle: Husband Justin Falvey runs Steven Spielberg's Amblin TV; "I wish everyone was like them because they understand what it takes to make strong, innovative television," said Judd Apatow.

Writer, Director, and Producer
Age: 43 Bona Fides: The movie publicist turned director helmed Best Picture Oscar contender Selma. Bold Move: DuVernay turned down an offer from Marvel to direct Black Panther, its first superhero flick starring a black character, over concerns there might be "too much compromise." What's on Tap: A drama for CBS called For Justice, an adaptation of the Natalie Baszile novel Queen Sugar for Oprah's OWN network, and a Hurricane Katrina film she'll write and direct. (@AvaEtc)

SVP of Development, Bravo
Age: 43 Bona Fides: Since Andy Cohen decamped from Bravo's executive suite to its talent roster, his successor is shaking things up at the Real Housewives empire with edgy scripted fare like The Girlfriends' Guide to Divorce and Odd Mom Out. Enviable Résumé: Worked at VH1, MTV, Logo, Showtime, and Disney. What's on Tap: While still in the market for fresh reality franchises, Spotts is expected to announce more original series. (@themspacman)

Casting Director
Age: 40 Bona Fides: She's the Emmy-winning casting director for mega-hits like Girls, Orange Is the New Black, Veep, and Bachelorette. Why She Matters: Her superb eye for "real" people—she cast Laverne Cox, Uzo Aduba, and Adam Driver in their career-making roles.

Senior Correspondent, The Daily Show
Age: 26 Bragging Rights: She's so popular that she fended off calls for her to replace outgoing host Jon Stewart. MC Predicts: A year with new host Trevor Noah before she strikes out on her own. (@MsJWilly)

Creators, Broad City
Ages: 28 & 31 Bragging Rights: Glazer (left) and Jacobson's louche, hipster series on Comedy Central, picked up for a third season, was the top show in cable in its time slot for men 18 to 34.

Actress
Age: 31 Bona Fides: The Golden Globe–winning star of the CW's Jane the Virgin is gearing up for the second season of her critically acclaimed dramedy.