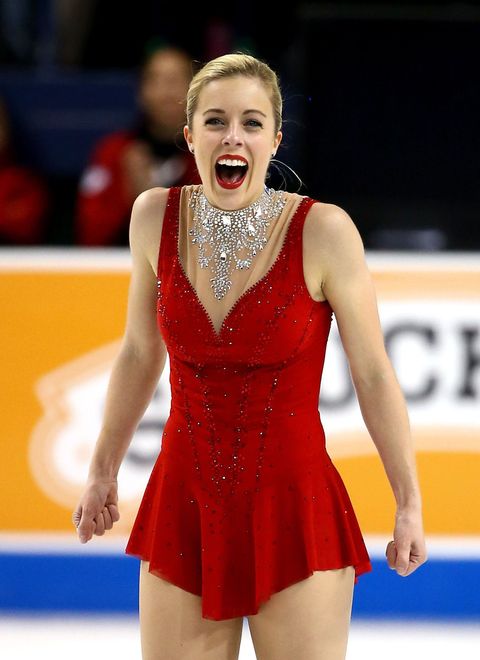 That's what happened Saturday at the U.S. Figure Skating Championships with Ashley Wagner, who skated a flawless—as in record-shattering flawless—program, all while wearing a trompe l'oeil statement necklace à la Nicole Kidman's Satine.

"This, of my three [national] titles, is the one that tastes the sweetest," Wagner told NBC. "I've had so many critics over the past couple of months. I've had so many people who said I'm too old for this, I am burnt out. But you know what? I am so hungry to make a career for myself. I was able to turn all this negativity into something positive."

It's hard to believe, but Wagner, at 24, is the oldest U.S. women's champion since Michelle Kwan in 2005. (You have to remember that figure skating, like gymnastics, is normally a teenager's game.)

Take in the breathtaking, goose-bump-raising performance below.

The Ice Skating Move Most Likely to Cause a Nip Slip

This content is created and maintained by a third party, and imported onto this page to help users provide their email addresses. You may be able to find more information about this and similar content at piano.io
Advertisement - Continue Reading Below
More From Culture
Zendaya Shared Pics From the Set of 'Euphoria'
Are Chloe and Mitchell from 'The Circle' Dating?
Advertisement - Continue Reading Below
Get to Know DeLessa From 'The Circle'
The Best Korean Dramas to Get You Hooked
Did Beyoncé Really Meet Selena?
How Selena's Sister Honors Her Memory
Get to Know Courtney From Season 2 of 'The Circle'
Meghan Will Release Debut Children's Book in June
Celebrate AAPI Heritage Month With These Leaders
Historical Films to Stream If You Loved 'Hamilton'