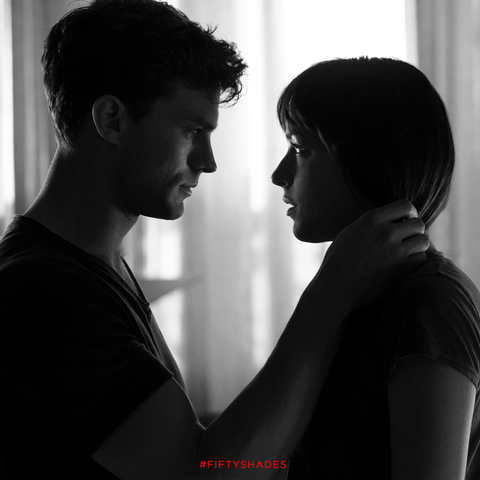 And actually, the more scintillating scenes made Fifty Shades the boundary-pushing book fans love—and we're thinking they definitely could have been incorporated into the film with a little careful editing and innuendo.

Welcome to Fifty Shades's amazing and somewhat hilarious thumb-sucking scene, which takes place directly after Ana loses her virginity. While it's somewhat understandable that this scene was cut from the film, it does serve a purpose. Ana and Christian's first time was virginal and vanilla, and by immediately following it up with Christian exerting his dominant and somewhat fetishistic behavior, the reader is reminded of what he's really capable of. (Note: Ana also has sex from behind for the first time in this scene!)

Make no mistake: Ana and Christian enjoy a sudsy bath during themovie, but Ana's first blow job is completely cut out of the equation. We're thinking it was probably in an effort to keep the film's R rating.

Anastasia enjoys just one overt moment of dominance over Christian in the book version of Fifty Shades. She undresses him, announces that she's "in charge," and even uses some of his classic lines like "You'll have to learn to keep still." Depending on your interpretation, this scene potentially gives some semblance of (much-needed) equality to Ana and Christian's relationship.

Remember when Christian placed two silver balls in Ana's vagina and asked her to walk around with them in her before eventually doing the deed? Yeah, that didn't happen in the movie. While the moment could have been recreated without being too overtly explicit, it likely got axed due to the abundance of steamier scenes. Plus, if producers had made time for vaginal balls, poor Rita Ora might have been cut out completely.

There's clearly no way that this particular scene could have been included in the film, mostly because it involves Christian being turned on by taboo sex. But what's the problem, really? Periods are part of everyday life for half the population, and it's pretty great that Christian doesn't care about Ana bleeding. In fact, if it weren't for his abundant control issues, this could almost be considered a feminist moment for Mr. Grey.

What to Drink Before You See 'Fifty Shades'

And you can see all our (extensive!) Fifty Shades of Grey coverage here.