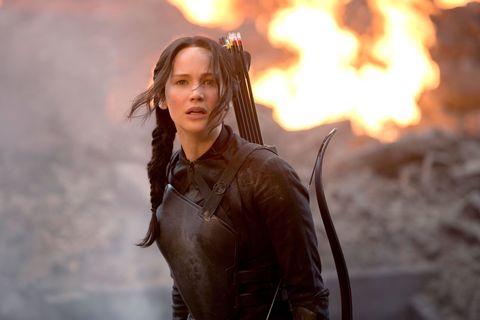 In Panem, Katniss shoots other children full of arrows because she has to. In modern-day Britain, unemployed and low-income workers compete against one another on TV because some network executives thought it would be entertaining.

On Britain's Hardest Grafter, a five-part BBC series, 25 contestants will "experience different 'blue collar' roles," AKA hard physical labor, with the least productive voted off until one remains. The winner will receive $23,700, or the minimum annual wage for British workers outside London, according to the Hollywood Reporter.

Overall, this is despicable and such a missed opportunity. Because if they really wanted to go the Hunger Games route, they *could* have called it That Is Mahogany and made it about burly, bearded woodworkers chopping down trees and fighting to preserve their craft from industrialization. I'd watch.

Giphy
This content is created and maintained by a third party, and imported onto this page to help users provide their email addresses. You may be able to find more information about this and similar content at piano.io
Advertisement - Continue Reading Below
More From Culture
Wi Ha-joon From 'Squid Game' Is a Rising Star
'Midnight Mass' Was Filmed In British Columbia
Advertisement - Continue Reading Below
'Bachelor In Paradise' Spoilers: Your 2021 Guide
'Bachelor In Paradise' 2021: Everything We Know
'The Great British Baking Show' Release Guide
Love True Crime? Obsess Over These TV Shows
Fans Are Already Clamoring for 'Sex Education' S4
'Bridgerton' Season 2: Everything We Know
Who Is HoYeon Jung From 'Squid Game'?
'Succession' Is Ready to Go 'Full F*cking Beast'