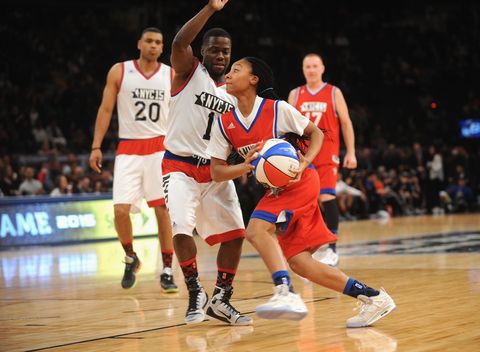 Because she is 14 years old, Mo'ne Davis is only about three-fifths (four-sevenths?) as tall as your average professional basketball player. But because she is a 14-year-old sports legend who threw a shutout at the 2014 Little League World Series, Mo'ne Davis just got the opportunity to *become* a professional basketball player.

The Harlem Globetrotters announced Tuesday that they are exercising something called a Future Discovery Clause, meaning they really, really want her to play for the team when she graduates from college. If she accepts, Davis will join other talented women—13 total, according to a Globetrotters rep—such as TNT Maddox and Sweet J Ekworomadu, both of whom are on the current roster.

Oh, and if you're like, "But isn't her sport baseball," 1) please know that Ms. Davis's favorite athletic pursuit is actually basketball, 2) she played on her high school's varsity team as an eighth-grader, and 3) she trounced Kevin Hart during the NBA All-Star Celebrity Game:

This content is imported from YouTube. You may be able to find the same content in another format, or you may be able to find more information, at their web site.
Chelsea Peng I'm Chelsea Peng, the assistant editor at MarieClaire.com.
This content is created and maintained by a third party, and imported onto this page to help users provide their email addresses. You may be able to find more information about this and similar content at piano.io
Advertisement - Continue Reading Below
More From Culture
The Sexiest New Movies of the Year
A Look Back at Princess Anne's Life in Photos
Advertisement - Continue Reading Below
Where Is the Cast of 'Gilmore Girls' Now?
'The Bachelor' Is Back!
Who Is "Queen" Victoria on 'The Bachelor'?
Matt James' 'Bachelor' Cast: Everything We Know
Get to Know Serena Pitt From 'The Bachelor'
The Best Lesbian Movies Streaming on Netflix
Listen to the Best New Love Songs of 2021 (So Far)
Who Is Christine Chiu on Netflix's 'Bling Empire'?