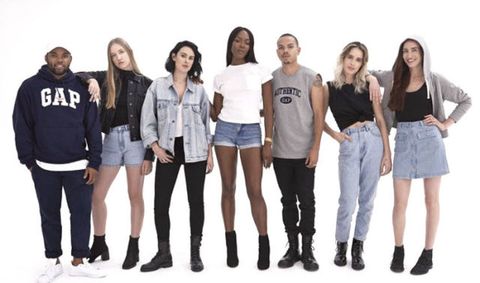 Back in the '90s there were two things you needed in order to be the ultimate cool girl. First, Calvin Klein CK One perfume, the more of it the better, and second, an item of clothing from the Gap.

It didn't really matter what item of clothing, a pair of jeans, a white tee, but more than likely it was a hoodie with the word 'GAP' emblazoned across your cest. Which of course you would interchange with your second most beloved hoodie—you know, the FCUK one.

Then the '00s came and suddenly Gap wasn't cool anymore and nobody wanted to get a lecture from Ryan Gosling.

But as is the case with fashion, everything always comes back round. Yes, we are still knee-deep in this '90s revival, so keep your choker on.

The Gap is making the most of this revival by re-issuing some of their most iconic pieces of '90s clothing. We're talking denim shorts, white tees, "Authentic GAP" vests, and of course those hoodies.

How you gonna show off your jean jacket? #TheArchiveReissue @Gap Limited edition out 2/7!

And it's not only the clothes that GAP have brought back, they've also revived their classic ads. You know the ones that normally feature a load of really cool people in a white room? Yeah, those.

The ultimate throwback: Our iconic ’90s looks are back in #TheArchiveReissue collection. Shop it for a limited time starting on 6th Feb online & in selected London stores.

Fronted by Naomi Campbell, the original Gap model from 1992, the campaign features a whole host of cool kids whose parents were all '90s icons, including Rumer Willis and Evan Ross.

We just hope we're considered cool enough to wear it.

Advertisement - Continue Reading Below
More From Fashion
The All-Time Best Online Thrift Stores
Anthro Is Taking 40 Percent Off WFH Essentials
Advertisement - Continue Reading Below
A Podiatrist Shares Tips for Buying Comfy Heels
The Most Daring, Sheer Celebrity Outfits Ever
Free People's Jeans Sale Is Giving Me Life
The Item I Wear to Death: My DVF Camel Coat
The Best Pairs of Grown-Up Denim Shorts Out There
Stock Up on Cute, Flirty Summer Dresses
Cartier Women's Initiative Announces Its Finalists
What Marie Claire Editors Wore to Get Their Jobs