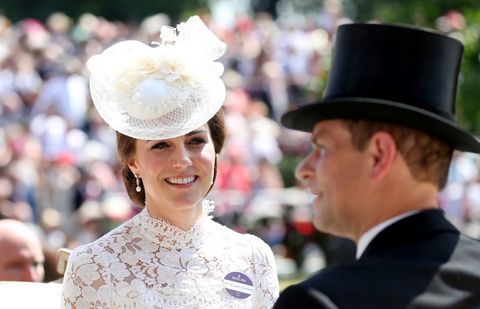 The Duke and Duchess of Cambridge joined the Queen and Prince Philip for the first day of Royal Ascot on Tuesday.

Following her debut at the five-day horse-racing meeting in 2016, the Duchess embraced the June sunshine in an understated but elegant Alexander McQueen design. Despite the sweltering heat, Kate opted for a high-neck style and kept her hair swept up in a low chignon.

Paired with a matching white hat, Kate's latest lace outfit looked very familiar. Although we haven't seen her where this exact dress before, it looked remarkably similar to the Dolce & Gabbana design worn by the Duchess last year.

Kate Middleton at Royal Ascot in 2016

Unfortunately for the men, the dress code in the Royal Enclosure isn't so suited for such hot weather. The rules state they must wear black or grey morning dress with a waistcoat and tie, plus a black or grey top hat, and as Prince William reminded us, formal Ascot attire isn't ideal during a hot spell...

Meanwhile the Queen, who is known to love watching horse-racing, looked thrilled to be there. She opted for a lime green outfit, teamed with a correspondingly colored hat.

The royals, who arrived at the races in the traditional carriage procession, were joined by Prince Charles and the Duchess of Cornwall, Prince Edward and the Countess of Wessex, Princess Anne ,and her daughter Zara Phillips.

Up to 300,000 people are due to attend the event over the next five days. The highlight of the British social calendar is known as the most glamorous event in horse-racing, with the most outlandish hats expected on Ladies' Day. 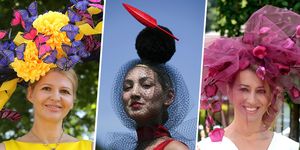 The Most Insane Hats from 2017\'s Royal Ascot