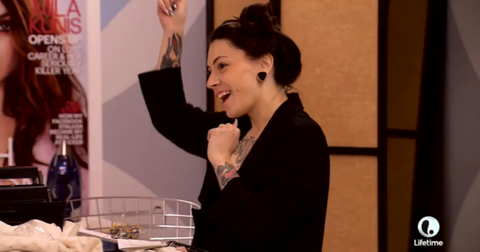 Woohoo! We made it, baby. After a billion episodes involving challenges with sharks and the NASDAQ, a winner will be crowned tonight.

Stuff to expect later: Alyssa stands in front of a starburst wearing a jewel-studded bolero. Leotard-clad acrobats perform tricks on hoops suspended from the ceiling. Zanna wants the three remaining designers to really push themselves. Zac Posen's star brooches sparkle and wink from his lapel. There are clothes, too, but you didn't think we'd spoil that, did you?

Tune in to Lifetime at 9 p.m. EST to find out who achieves "fashion immortality."

There Will Be a Wedding on 'Project Runway All Stars' Tonight

Stress Is Up, Hemlines Are Down on 'Project Runway All Stars'