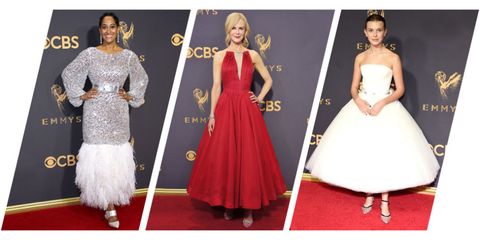 With Sunday evening's Emmys, we're officially off to the races, with the shiny ponies galloping until March's Oscars. But with that first showing, we can already make some fashion predictions on what will be in this awards-show season. See your best bets ahead.

We felt the first tremblings of this one at Cannes, where celebrities sometimes wore *literal* wedding dresses on the red carpet, and the seismic activity surrounding bridal white—a former no-no—is only spreading. Just look at Jennifer Lawrence in Dior. Much more successful than the movie she was promoting, I reckon.

Madeline Brewer at a pre-Emmys event

Like Issa Rae in custom Vera Wang or you this summer, celebrities are embracing single shoulders with open arms (one's just a little colder than the other). It's a very flattering silhouette we haven't seen at the awards shows in a while, so 👌.

Kathryn Hahn at a pre-Emmys event

Julianne Hough in Marchesa at the 2017 Emmys

Their stylists are looking at the runways too, and the runways were whispering "Put Nicole Kidman in deep red Calvin Klein by Appointment, Julia von Boehm. Dooooo it." And she did, and many others will too before the last Oscar is given out.

Gina Rodriguez in Naeem Khan at the 2017 Emmys

Keri Russell in Polly Wales at a pre-Emmys event

OH MY TOM FORD. Not even a day after the Emmys, AKA Sequin Central, happened Julianne Moore shows up to the Kingsman premiere looking like a statuette herself. But it's not the "if you can be it, you can achieve it" thinking from seasons past, exactly—silver seems to be the front-runner, with other metals fall not so far behind.

Sarah Paulson in Carolina Herrera at the 2017 Emmys

Tracee Ellis Ross in Chanel Haute Couture at the 2017 Emmys

How many Trump jokes were made last night? Loads—and that was just during the ceremony. While no one has gone so far as to wear Macy Gray's legendary VMAs dress but promotional in a different way (of the president's impeachment, perhaps), there were more blue ACLU ribbons dotting the red carpet than ever before.

Judith Light at the 2017 Emmys

Next
All the Best Looks from Emmys After-Parties 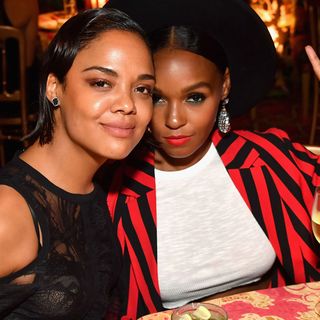