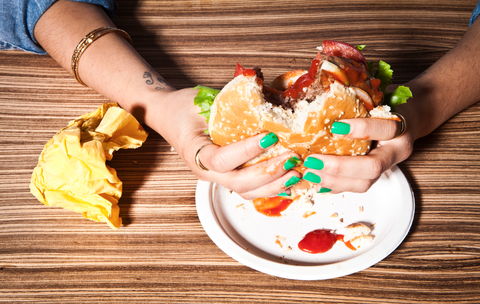 BREAKING. Psych (kinda). According to a new study, weed takes over parts of your brain to make want to eat an entire bag of Cheetos and never look back.

Here's how munchies get triggered, via Reuters: When cannabinoids (the active ingredient in marijuana) bond to receptor cells in your brain, the cells start sending out endorphins instead of their usual appetite-suppressing chemicals. The endorphins, which also make you feel really happy, travel to your hypothalamus, the part of your brain that stimulates appetite. So even if you feel full, your brain will tell you to keep chowing down.

"It's like pressing a car's brakes and accelerating instead," lead author Tamas Horvath said in a press release. "We were surprised to find that the neurons we thought were responsible for shutting down eating were suddenly being activated and promoting hunger, even when you are full. It fools the brain's central feeding system."

So if Krispy Kreme sales skyrocket in Washington and Colorado, there's a perfectly reasonable reason why. It's just chemistry.