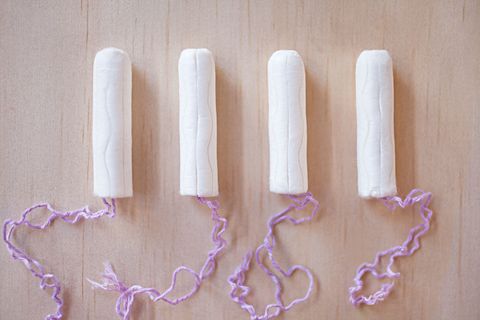 You're "used" (we mention that word very loosely) to the headaches/cramps/bleeding that come every month from your Aunt Flow. However, what if we told you that what you think is a "normal period" was actually your body trying to warn you of bigger health issues? True, what's a typical period for one woman doesn't mean it's a universal fact—but there are symptoms you might overlook. Here, things you should be chatting with your gyno about right away.

In an *ideal* world, your period would come like clockwork: arrive every 28 days, suffer for two to three days, then disappear until its next visit. But this is real life, and everything sucks (just kidding, but really). A menstrual cycle happening every 21 to 45 days is considered completely normal, says Sherry Ross, M.D., a Los Angeles-based gynecologist. Women don't notice an actual regular period until later in life.

The problem enters when your period arrives too frequently—say, every 20 days or fewer—or too spread apart (about a month and a half between cycles), says Ross. Stress (damn you), restrictive diets, and hardcore rigorous exercise tend to cause your period to come less often, says Mary Jane Minkin, M.D., clinical professor of obstetrics and gynecology at Yale School of Medicine. That said, if these things are causing your irregular periods, they're not life-threatening per se, but it's best to alert your doctor nonetheless. One of the bigger issues behind unpredictable periods—if none of the above apply to you—is thyroid disease. Hyperthyroidism causes periods to occur further apart, while hypothyroidism causes the body to have more frequent, heavier-flowing periods.

FYI: Depending on your birth control option (the Pill, IUD, injections), your cycle will be affected in different ways, so something to keep in mind when you see your gyno next.

Cramps are the ultimate/literal punch in the gut so to tell you that there's worse pain than what you already feel on a month-to-month basis is a shitty thing for us to say...but deal with it (us, not the cramping).

Two main things affect your cramps: high levels or overproduction of a hormone-like material called prostaglandins—which are made in the uterus—or an increased sensitivity to them. For patients with too-painful-to-deal-with aches, Minkin recommends they take anti-inflammatories (Motrin or Aleve for example), which block the making of prostaglandins, BEFORE the misery ensues. Otherwise, if you take them during the cramps, the prostaglandins already produced will still linger in your system despite the meds.

If your go-to over-the-counter pill isn't making you any better, seek help. One popular theory behind prostaglandin overproduction is that it's connected to endometriosis but experts aren't completely convinced yet, says Minkin.

Neither Minkin nor Ross have ever heard of a woman complaining about a lighter period—and an easy flow usually means you're not at any major health risks. LUCKY. But that brings us to the opposite end of the spectrum. Ross defines normal blood flow to last between two and seven days with a woman using roughly three to six tampons per day.

But if your period is like, let's say, a monsoon or never-ending flood—you *know* those visuals in your head were necessary—then you need to dial your doctor's digits. Reasons include a hypothyroid (see above) and possibly something funky lingering in your uterus like fibroids in the lining, polyps, or endometriosis. Again, bleeding is relative to each person, but Minkin says that if you're changing a tampon every hour, that's too heavy.

Kenny Thapoung Social Media Editor When I'm not stalking future-but-never-going-to-happen husbands on Facebook, you can catch me eating at one of NYC's B-rated or below dining establishments—A-rated restaurants are for basics.
This content is created and maintained by a third party, and imported onto this page to help users provide their email addresses. You may be able to find more information about this and similar content at piano.io
Advertisement - Continue Reading Below
More From Health & Fitness
Power Pick: SoulCycle's At-Home Bike
Yes, You Should Be Taking a Probiotic Every Day
Advertisement - Continue Reading Below
The Best Workout Apps for Women Who Want Results
Pilates Mats for Crushing Your Fitness Goals With
Our Favorite Yoga Apps for Beginners
Stress-Relieving Gifts That Will Put You at Ease
How Do We Find Joy Again?
Dr. Fauci's Advice for Keeping Your Immunity Up
How to Build a Mini Gym at Home
Transitioning in the Age of Zoom