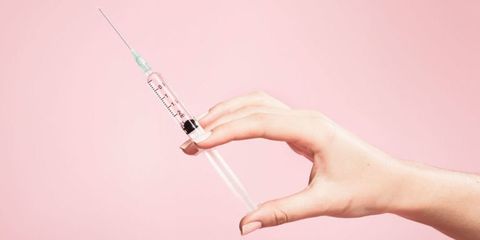 Since it was introduced 10 years ago, the vaccine that prevents HPV, or human papillomavirus, has reduced the sexually transmitted virus's prevalence among teenage girls by 64 percent, federal researchers said today. Since the vaccine is most commonly recommended for 11- and 12-year-olds, the drop is lower but still significant at about 34 percent among women between the ages of 20–24. Rates didn't fall among women age 25 and older.

The most dangerous strains of HPV—an STI that causes cervical cancer—have been dramatically reduced, according to New York Times. An expert with the American Cancer Society told the Times the falling rates mean "the [HPV] vaccine is more effective than we thought."

Despite the proven effects of the HPV vaccine, immunization rates remain low—only about 40 percent of girls and 20 percent of boys between 13 and 17 have been immunized. The vaccine has been controversial since it was introduced, mainly because it means introducing the idea of sex and STIs to preteens who aren't yet having sex. According to the Times, the only areas that require the vaccine are Virginia, Rhode Island, and Washington, D.C. Past studies have even found that some doctors don't recommend the vaccine to patients because they're worried about bringing sex up with parents, or personally feel that giving a vaccine that prevents an STI to an 11-year-old patient is inappropriate.

Previous research has shown that the best way to prevent HPV is to vaccinate children before they're ever exposed to HPV or have sex, and researchers expect this news about the effectiveness of the vaccine will encourage more pediatricians and doctors to recommend it to their young patients. Even with these drops in HPV, the American Cancer Society still expects about 4,120 women will die of cervical cancer this year.

One of the obstacles to encouraging people to be vaccinated is that the vaccine is given in three doses at three separate appointments in the United States. According to the New York Times, an advisory committee will meet with the CDC this week to discuss the efficacy of giving only two doses.

This content is created and maintained by a third party, and imported onto this page to help users provide their email addresses. You may be able to find more information about this and similar content at piano.io
Advertisement - Continue Reading Below
More From Health & Fitness
Frida Mom Ad Shows the Struggles of Breastfeeding
Considering Changing Up Your BC? Read This First.
Created for From Marie Claire for Created by Marie Claire for
Twirla
Advertisement - Continue Reading Below
Texas DV Shelter Destroyed by the Winter Storm
What We Know About the B.1.1.7 Variant
The “Invisible Disability” You’ve Never Heard Of
Why I Got the COVID Vaccine at 32 Weeks Pregnant
Power Pick: SoulCycle's At-Home Bike
Yes, You Should Be Taking a Probiotic Every Day
The Best Workout Apps for Women Who Want Results
Pilates Mats for Crushing Your Fitness Goals With