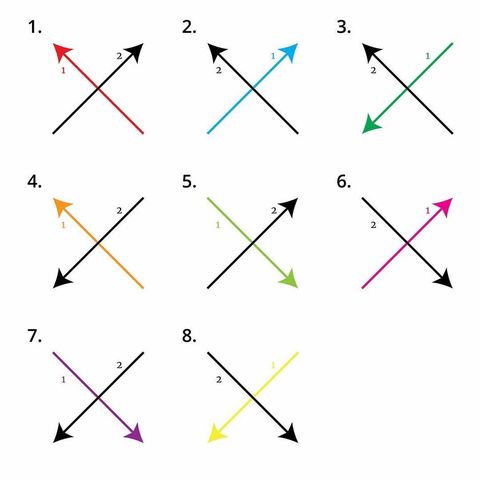 More divisive than the Oscar nominations, the most hotly contested thing on the internet right now isn't whether or not Bradley Cooper got snubbed. It's this important question: How do you draw an X?

Twitter user @smasey posed this inquiry on on January 19, after spotting a quiz created by @cyanpotato that showed eight different variations of X's. She shared the graphic with her friends, which was later seen by nearly 71,000 people and retweeted by 18,000, catching the attention of media outlets (like ours) and providing the perfect small talk chatter for pretty much anyone you'd meet in line at the grocery store.

When we asked our own Instagram followers how they depict the letter, most shared that they write like #7. But many of you wanted to know: What does that mean? So we asked certified master handwriting analyst Kathi McKnight—who has analyzed the signatures of everyone from Oprah to President Barack Obama—to break down what your X-writing style says about your personality.

And, it turns out, a lot of you have a rebellious streak.

If you were one of the many folks to share that you're a #7—which means you draw your X's by starting a stroke on the top left of the page, moving the pen to the bottom right—McKnight says you're not only in the norm, but also writing your X's the "right" way.

In the English language, she explains, this is considered the "balanced" way to move your pen. "Think about it: We move from left to right across the page when writing—left margin to right margin. We start a cursive letter from left, and proceed to the right. In printing, we start at the top and stroke down," she says.

Anything else would be considered a "regressive stroke," which, according to handwriting analysis, reveals "rebelliousness, going back into the past, and negative self-talk," McKnight explains.

Of course, because we're dealing with computer-generated fonts and not actual penmanship, it's a bit of a stretch to call this "handwriting analysis" since pressure, slant, and size are the key factors in determining personality. Still, McKnight says, the same principles can be applied here when simply just considering how you would draw an X.

So without further ado, here's what your X-choice says about you:

If you draw your X with two reverse strokes, starting from the lower right, it indicates that while you may want to move forward, you have both feet stuck in the past.

If you draw both lines moving forward, yet starting in reverse—from bottom left, then the bottom right—you are a renegade. You have a strong desire to slingshot yourself out of your past and move forward, yet the past still has its grips on you.

The reversed strokes—starting top right—demonstrate that you're a rebel without a cause.

Because only your second stroke is drawn the "normal" way—top right to bottom left— it implies that while you're trying to focus on the future, a part of you is still tempted to go backwards, as if you're driving while looking only through the rearview mirror.

The first half of this X—drawn from top right to bottom left—is made "correctly," but the 2nd—drawn from bottom left to top right—is written in reverse direction, revealing that you're a maverick. It feels good to live by your own rules, doesn't it?

Because you start your stroke from bottom left, and out of order, you're a trendsetter—and you own it.

This is how you were likely taught in school to write your letters, going from left to right. That indicates that you don't tend to stray from the norm—and you like order and balance.

Like most of these choices (besides #7), if you start from the top right, you prefer to think outside of the box.

Alright, so maybe this isn't quite the same insightful window into your soul as, say, years in therapy, or perhaps even a zodiac reading. But if you were as captivated by those eight colorful X's as we were, hopefully now that you know the "correct" way to write an X, you'll have the final word in this great debate—and a little bit more insight into what something as small as a letter of the alphabet reveals about you.

Related Stories
Give Paddington 2 An Oscar!
The Best Bang Styles for Every Hair Texture
Jennifer Aniston's Style Evolution in 50 Photos