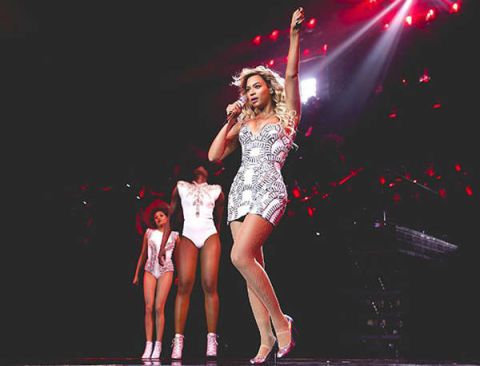 I know everyone says they hate working out, but I really, truly hate working out. I haven't stepped foot inside a gym in over 5 years, nor have I been able to hold onto any kind of workout routine for longer than one month. Recently, my best friend gave me a card for several free classes at her yoga studio—but I know that card will go unused. Workout classes from spinning to the bar method have become to the new fashionable networking opportunity—one of which I politely decline every time. Fortunately, genetics have granted me a fast metabolism, so it's hard for me to find motivation to get on a treadmill, elliptical or stationary bike.

Growing up I was a dancer. My mother enrolled me in ballet and tap classes by the time I was 5 years old. When you take the dancer route, and take it seriously (or at least pretend to), playing sports is frowned upon. I recall a friend getting scolded because she wanted to play soccer while she was a ballerina in training. If you played a sport you were more likely to get injured or confuse your muscles—so I was a dancer only for 10 years. Yeah, there were times where I thought about following in my older brothers' footsteps and playing soccer or lacrosse, but I didn't dare go against my dance instructors.

By the time I reached high school, I was over the strict training of my dance academy—and I quit. Instead, I refocused my energy into joining my high school dance team with a few of my closest friends. We performed hip-hop dances during half time at football games in the fall, and basketball games in the winter. This is when I really began to derive real happiness from dancing—ballet was never really "fun," I just did it because I was good and because people told me I was born to be a dancer.

Since then, I never really found a "workout" routine that I felt excited about or made me feel good. Instead of being a fad dieter, I've dabled in fad exercising. Before I moved to the city, I found a small yoga studio in Westchester where I grew up that I loved and practiced a few times a week for a several months, but once I moved to the city, I couldn't find a studio that gave me the same intimate experience. I would run the Williamsburg Bridge with a friend, but after a few short weeks I developed achilles tendonitis—only proving to myself that working out is bad for my health. I've tried Ballet Beautiful DVDs at home—trying to tap into my former dancer identity—but forcing myself to be active at home was a bit of a challenge, especially when my bed and Netflix were so close in proximity.

It wasn't until I heard (or rather learned on Instagram) that a
Beyoncé dance class existed in Manhattan
that I really felt inspired to get involved in a new activity—that might also be good for my health. I signed up immediately, and at $18 a class that seemed like a bargain compared to what my friends pay for other cult fitness classes. I was a little nervous going into my first
class
. While I go out dancing on the weekends with friends, it's been 10 years since I actually had to learn dance choreography. Would everyone be better than me? Would I remember the moves?

But just like riding a bike, you never forget—although I definitely felt a little shy in the beginning. The intructor urged us to loosen up, let out our inner Sasha Fierce and not to worry about whether others are watching you. Dancers can be extremely competitive—but my fellow Bey-wannabes, which included a lot of fashion-industry insiders—were there just to have fun (and sweat!), not to try to show anyone up. Each class takes you through a routine for different songs on Beyoncé's latest album—we've step-ball-changed and gyrated our way through "Partition", "Blow", and "Grown Woman" already.

To no one's surprise, there's been an overwhelming interest in the class, (originally it was only supposed to exist for the month of March) so the dance studio has permanently changed their Monday night dance class to Queen Bey only—and any Beyoncé song is fair game. The instructors now enlist the class attendees to vote on the following week's song. When the class decided on doing "Run the World" I knew I had to bring my best friend along, who is also a former dancer. In the past she and I have spent time trying to learn the dance on our own—it's not easy!

One of the highlights of the class, is at the end when everyone splits into 2 groups to perform the dance without the teacher—each group will record an iPhone video of those performing. It's a great record to have—either to help improve your moves or for social media bragging rights. Throughout each of these hour-long classes, I never once looked at the clock hoping the class would be over sooner, like I've always done with any other fitness class. I may not exactly feel like Beyoncé when all is said and done, but the high I feel after mastering a routine of her's can't be beat. Fitness, we might just make it after all.

Chrissy Rutherford Contributing Editor Chrissy Rutherford is a contributing editor at HarpersBazaar.com
This content is created and maintained by a third party, and imported onto this page to help users provide their email addresses. You may be able to find more information about this and similar content at piano.io
Advertisement - Continue Reading Below
More From Health & Fitness
My Breast Cancer Journey Took an Unexpected Turn
Fitness Gifts She'll Actually Use All the Time
Advertisement - Continue Reading Below
I'm a Black Woman, Mother, & Breast Cancer Patient
Jenna Dewan’s Post-Baby Abs Are 🔥 In New Pic
What to Know About Your Blood Type and COVID-19
Enduring Breast Cancer in a Covid-19 World
Deciding Between a Lumpectomy or Mastectomy
Everything to Know About COVID-19 vs. the Flu
Do COVID-19 Symptoms Happen in a Certain Order?
Are Contact-Tracing Apps Worth the Privacy Risk?