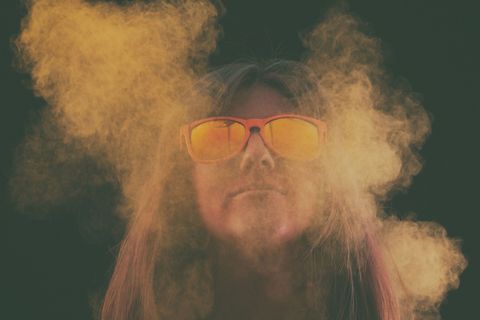 Alaskans have a new way to chill (besides stepping outside). Starting today, recreational marijuana use is A-OK for anyone over 21, according to the Anchorage Daily News.

Alaska is the third state in the U.S. to legalize recreational marijuana use, the Associated Press reports. Fifty-two percent of residents voted for the initiative, which clears up decades of legal confusion in the state around weed.

Legalization comes with lots of restrictions in Alaska, though. You can't light up in public—that'll get you a $100 fine. But the government has yet to really figure out what "public" means, and a special board is set to convene today to figure that out. Anchorage police might hand out tickets if you smoke on your porch. And of course, driving under the influence of pot is definitely still illegal.

And while it's now legal to possess up to one ounce of marijuana and transport it, you still can't legally sell pot in Alaska. The state still has to set up regulations around commercial marijuana sales, and that will take at least a year to figure out. Exactly one year from now, Alaska will have to start accepting business applications. You can, however, carry accessories like pipes, and each household can have up to six plants growing at a time.

All this is good news for former TV reporter Charlo Greene, who famously quit on the air, yelling "F*ck this," to dedicate her time to legal weed in Alaska. Looks like she can light up to celebrate.

Advertisement - Continue Reading Below
More From Health & Fitness
How to Be More Spiritual in 2020
Sleep Supplements for Sweeter Dreams
Advertisement - Continue Reading Below
31 Must-Have Workout Apps for Women
Are New Year's Resolutions Still a Thing?
Gifts That Will Delight and Destress
Products Every New Mom Will Love
Found: The Best Running Sneakers
Debunking the Dangerous Hymen Myth
The Virginity Testing Crisis
Carpe Diem? YOLO? Here's What a Shrink Has to Say