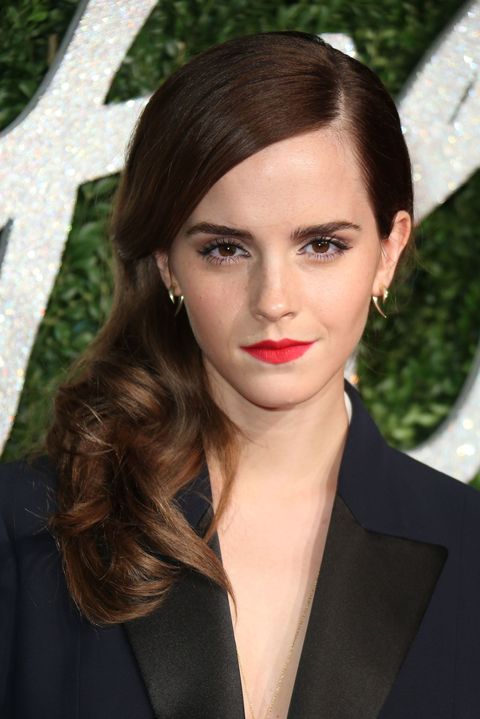 Last September, Emma Watson launched the United Nations' #HeforShe initiative with one of 2014's most powerful speeches on gender equality. The campaign's success, evident in the 1.2 billion social media conversations it sparked, has stunned her, she told world leaders today in Davos, Switzerland. "I couldn't have dreamed it, but it's happened." Watson then introduced the campaign's next phase, Impact 10x10x10, and delivered a second rousing speech on equal rights.

Impact 10x10x10 is about "engaging governments, businesses, and universities, and having them make concrete commitments to gender equality," she said.

@npaisley8 concerete commitments to gender equality from at least 10 governments,10 businesses and 10 universities.

Watson explained that people have struggled with figuring out what the next step is after signing the petition, but that the answer is personal. "Men and women want to help, but they aren't sure how best to do it. Men say they've signed the petition. What now? The truth is the 'what now' is down to you. What your #HeForShe commitment will be is personal. And there's no best way. Everything is valid. "

Watson then noted the campaign's effects on her:

"I've had my breath taken away when a fan told me that since watching my speech she has stopped herself from being beaten up by her father. I've been stunned by the amount of men in my life that have contacted me since my speech to tell me to keep going. And that they want to make sure their daughters will still be alive to see a world where women have parity economically and politically. While I would love to claim that this campaign and the results of it are a result of my incredible speech writing skills, I know it is not."

She also highlighted that it's not just important for women that females are represented in society, it's important for all of us: "It is my belief that there is a greater understanding than ever that women need to be equal participants in our homes, in our society, in our governments, and in our workplaces, and they know that the world is being held back in every way because they are not," she said.  "Women share this planet 50-50, and they are underrepresented, their potential astonishingly untapped."

The new initiative forwards this dialogue—and Watson emphasizes it is a dialogue. "I'm here to ask you what is the impact you can have?" she asked leaders at the closing of her speech. "How? What? Where? When? And with whom? We want to help. We want to know, and we want to hear from you."

Watch the full speech below.

Alyssa Bailey News and Strategy Editor Alyssa Bailey is the news and strategy editor at ELLE.com, where she oversees coverage of celebrities and royals (particularly Meghan Markle and Kate Middleton).
This content is created and maintained by a third party, and imported onto this page to help users provide their email addresses. You may be able to find more information about this and similar content at piano.io
Advertisement - Continue Reading Below
More From Politics
41 Surprising Rules First Ladies Have to Follow
Asian American Women on Where to Go From Here
Advertisement - Continue Reading Below
Syrian Journalists Reflect on a Decade of War
How to Show Your Support for the AAPI Community
Activist Lydia X. Z. Brown on Disability Justice
Elisa Crespo: "I'm Not Here to Make History"
What We Know About the Georgia Spa Shootings
Dianne Morales Has Never Listened to the Naysayers
Stacey Abrams on Her Definition of Success
Grand New Party?