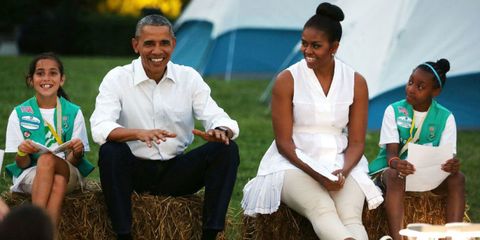 On the heels of a GOP debate in which the issue of equal pay was once again overlooked, President Obama reminded Americans that his work in the United States is not yet done.

Today, he extended the powers of the Lilly Ledbetter Fair Pay Act, which he signed into law exactly seven years ago today. It was his first piece of legislation as president. Since then, the bill has made it easier for women to sue companies for wage discrimination and ensures that both men and women have resources to fight unequal compensation. But it is not perfect. Even now, women make only 79 cents on every dollar that men earn. For minorities, the numbers are even worse.

This morning, Obama announced a new plan to narrow that gap. In partnership with the Department of Labor, the Equal Employment Opportunity Commission will set forth a proposal to require companies to report employee salaries to the federal government. The data will be broken down by race, gender, and ethnicity, highlighting any discrepancies in compensation.

"Bridging the stubborn pay gap between men and women in the work force has proven to be very challenging,"Valerie Jarrett, a senior advisor to Obama, told The New York Times. "We have seen progress, but it isn't enough."

While the executive order will go into effect whether his pals in Congress like it or not, Obama declared that he intends to press the legislative branch to go further and pass a bill that would allow women to sue for "punitive damages for pay discrimination." Republicans have a very good reason for blocking these measures, of course. Some have said they would lead to "frivolous" lawsuits.

Women—that's us! Frivolous, female, and fighting back since the dawn of time.