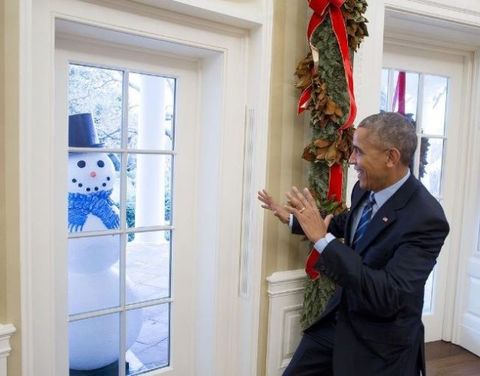 Nothing says "holiday cheer" like pranking the President of the United States, which is why White House staffers banded together to pull an Ashton Kutcher and punk Barack Obama...with an adorable snowman.

Do you want to build a snowman? ☃

Apparently, White House staff set up that friendly-looking fellow in order to make it look like he was watching Obama through the window. In other words, the president is being fully trolled by a snowman. ¯\_(ツ)_/¯

"For the past three weeks, there have been four snowmen on display in the Rose Garden," explains White House photographer Pete Souza on Instagram. "We've been joking that we should move the snowmen a few feet closer to the Oval Office every day to see if anyone noticed. Then we realized the snowmen were too heavy to easily lift. But finally this morning before the President came to the office, some helpful staff—I won't say who—moved all the snowmen so each one was peeking through a different window into the Oval. This photo was taken this afternoon as the President signed end-of-the-year bills."

So, this is fully the best prank ever, yes? Yes.

Another snowman from yesterday. Yes he enjoyed the prank. See previous post for the backstory.

Mehera Bonner Contributor Mehera Bonner is a news writer who focuses on celebrities and royals—follow her on Instagram.
Advertisement - Continue Reading Below
More From Politics
And Now, a Word From the Future Voters of Iowa
Ayanna Pressley Wants Total Justice for Survivors
Advertisement - Continue Reading Below
Jot Down These 2020 Voter Registration Deadlines
What the ACLU Will Fight For in the Next 100 Years
Behind the Controversy at the Women's March
Women Are Not Granted Equality in the Constitution
Electability Is About Us—Not the Candidate
Everybody Running for President In 2020
Time’s Up for Wall Street
Women of Color Ruled Last Night's Debate