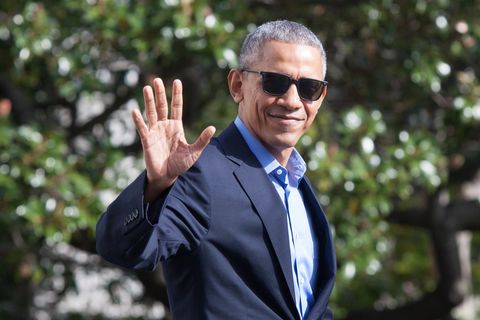 FDR hung around for two extra terms because of extenuating circumstances such as World War II and the Great Depression, so if hurtling toward destruction is what it takes, when can we tag Obama in?

On Monday's Axe Files podcast, the outgoing commander in chief said he has faith he would have won the 2016 presidency if he had been eligible to enter the race.

"I am confident in this vision because I'm confident that if I had run again and articulated it, I think I could've mobilized a majority of the American people to rally behind it," he said to listeners. "I know that in conversations that I've had with people around the country, even some people who disagreed with me, they would say the vision, the direction that you point toward is the right one."

And here is his gracious would-be opponent's response.

Chelsea Peng I'm Chelsea Peng, the assistant editor at MarieClaire.com.
This content is created and maintained by a third party, and imported onto this page to help users provide their email addresses. You may be able to find more information about this and similar content at piano.io
Advertisement - Continue Reading Below
More From Politics
What Is Mutual Aid? For One, Not a Trend
How to Help Texans During the Winter Storm Crisis
Advertisement - Continue Reading Below
Hate Crimes Against Asian Americans Are Rising
Anti-Trans Bills Are in the Works Across the U.S.
Vanishing Act
The Women Who Took on ISIS—and Won
Yes, Trans People Belong in Sports
I’m a Parkland Survivor. Rep Greene Must Resign
Why Indian Farmers Have Been Protesting for Months
AOC Opens Up About Her Trauma