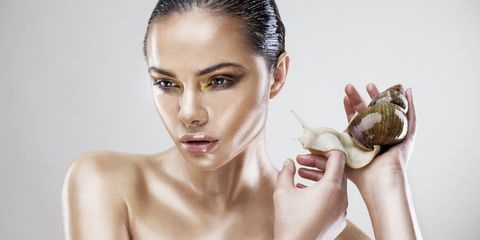 Growing up, I was a full-blown needlephobe, to the point that I once kicked my pediatrician in the stomach. (She was just trying to give me an overdue tetanus shot.) Over the years, I've (mostly) overcome my fear of needles, but the sight of one still makes me squeamish. And yet, a few days ago, I voluntarily had several thousand drilled into my face. Oh, and after that, an aesthetician slathered on some snail excretion while I was still bleeding.

In the realm of weird beauty trends, both snail slime and microneedling earn the headlines they've garnered lately—not just for their wackiness, but for their effectiveness. Snail mucus, which has mainly been introduced as an It ingredient to Westerners as part of the SoKo beauty wave, is revered for its ability to provide a near-instantaneous glow to skin: It naturally contains large amounts of antioxidants and hyaluronic acid, and doctors and skincare specialists alike tout its ability to boost collagen. The same can be said for microneedling, the act of rolling a device with hundreds of tiny needles across one's face in the name of younger looking skin.

So when I learned about the kitschily-named EscarGlow facial, a treatment exclusively offered at plastic surgeon Dr. Matthew Schulman's offices in New York that combines the two trends, I was game to investigate. And though my formerly needlephobic self balked at the idea of rolling thousands of microscopic spikes into my face, given what the facial promised—collagen reproduction and radiance that would rival even laser treatments—I made my way over to Dr. Schulman's offices this week at much-quicker-than-a-snail's pace to give the procedure a try.

My aesthetician, Amanda, walked me through the procedure: She would begin by applying a serum to small areas of my face before going over that area two to three times with the microneedling tool, the Dermapen. Once she had microneedled my entire face, she would complete the treatment by applying a layer of the snail serum concentrate. By using the Dermapen, she explained, she was creating micro-injuries to my face in a controlled environment—collagen is produced as your face recovers. Because snail serum naturally contains such a high growth factor, it rapidly accelerates and amplifies this recovery process, making the facial a far less traumatic but equally effective treatment to lasers for a manner of problems: acne scarring, fine lines, and under-eye bags. "Typically," Amanda told me, "We recommend three to six treatments before those problems disappear and patients can just maintain without microneedling." At just $375 a treatment—compared to the thousands of dollars laser treatments typically cost—it seemed almost too good to be true.

"Any other questions before I begin?" she asked. "Does it hurt?" I ventured casually, knowing full well what the answer would be.

You know when you're getting a cavity filled, when the dentist fires up the drill for the first time and your brain goes Ohshitohshitohshit? Imagine hearing that noise with the knowledge that the "drill" was headed towards your face, sans Novocaine. (To be fair, the doctor offered numbing cream beforehand, which I briefly considered before deciding that I would woman up and do this right.)

But once I got over the initial shock, it actually wasn't so bad. It definitely hurt, but not unbearably so: a good amount of stinging along with a heavy vibrating sensation that actually wasn't too unlike getting a tooth drilled. Amanda had warned that I would be most uncomfortable when she used the Dermapen in the less fleshy parts of my face, and she was right—my forehead, nose, and chin were the most painful spots. After she finished each area, my skin felt raw and inflamed, like a bad sunburn.

I had assumed ahead of time that the part of the facial in which thousands of tiny needles were rolled into my visage would be the painful part. I quickly began to realize that I may have been wrong about that when Amanda handed me a small fan and said in that tell-tale, too-calm doctor voice, "Feel free to use this if you're feeling 'uncomfortable;' this may sting a little." I was right to be suspicious: When she applied the snail serum onto my freshly needled skin, my complexion burned in protest.

But then, it was over. All in all, the procedure was less than 30 minutes, and I could see why it would be appealing to those glamorous women who dash off to perfect their complexions during their lunch hours.

Then again, I had been warned that I would look "very red" for 12 to 24 hours after the procedure ("You don't have any plans tonight, right?" ventured Amanda a little too casually), and before even getting a look at myself post-facial, I expected the worst. I have a very sensitive complexion, and when dermatologists or aestheticians warn that "some people" might "rarely" have a stronger reaction to a treatment, I am almost always that "rare person." So when I got an eyeful of the blood that Amanda was sponging from my face, I practically booked my Uber home right then and there, certain that I looked so frightening that small children would run away screaming if I braved public transportation. When the procedure was finished and I chanced a look in the mirror, however, I was pleasantly surprised to see that I looked totally fine—just a little pink.

Amanda sent me on my way with three vials of the snail slime, which she instructed to apply every evening (starting the following day) after washing my face. In the meantime, I was not to use makeup or any kind of cleanser or products over the next 12 hours while my skin was still tender. By the time I got home, my face still ached; it looked and felt like I had fallen asleep on the beach with sunglasses on. And though I had been told that the redness would only fade over time, I woke up looking pretty gnarly: The pink had dissipated only in some places, leaving me blotchy, and I noticed that I had pinprick red dots on my chin, forehead, and nose.

In spite of its angry appearance, however, my skin felt incredible—smoother than it's ever been, and aside from my sensitivity and some dryness, I don't generally have a problematic complexion. I also noticed that even after a particularly sleepless night, my frustratingly immoveable under-eye bags were suddenly much less pronounced. The persistent smattering of blackheads on my nose had all but disappeared, and in general, my pores were undetectable. Of course, all of these individual things were only noticeable to my scrutinizing eye, but together, they made for a noticeable radiance that inspired some kind remarks from a few co-workers.

The redness disappeared by the day's end, but days later, the glow (er, EscarGlow) has remained. My skin remains impossibly smooth; I haven't used foundation or concealer since the treatment. And for the first time in who knows how long, my impossible under-eye bags don't require any—because they suddenly don't exist. Some of the things we do for beauty might be 100 percent batshit, and this more than qualifies. But hey, if it works, it works—and in the end, only I had to endure the pain to get there: A fun little fact I learned this morning? No snails were harmed in the name of my vanity.

How Turning My Teeth Black Actually Made Them Whiter

This Powerful Video Demonstrates How Much We Bully Ourselves