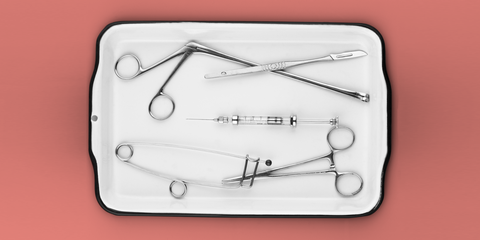 I had hated the nose I was born with for nearly my entire life. I did not care that it was in some ways a part of my identity, that I shared this trait with my deceased Jewish mother. No, I wanted it gone. I wanted a ski slope, movie star, tiny button nose. When people complimented my lovely brown eyes, all I heard was the non-existent slams on my clearly-hideous schnozz. It was close to an obsession.

The bump atop the bridge of my nose mixed with the downturn on the end made me consider myself hideous looking. When I found out that noses and ears never really stop growing, I hit near panic. It sounds utterly ridiculous now, but at the time, I was certain I would never find someone to marry me looking the way I did.

And plastic surgery is not cheap. To get a proper rhinoplasty, you'll need several thousand dollars. So when I stupidly managed to bounce my face, nose-first, off a door, and I heard the cracking sound the bump on my nose made when the glass interrupted my stride, it didn't take long for me to stop crying and realize my good fortune: insurance would cover my corrective rhinoplasty.

Armed with X-rays and doctors' notes, I made an appointment with a board-certified plastic surgeon and got the process going. I planned my surgery date to coincide with Christmas break and counted down the days to my new face. So long, bump! Fare thee well, hook!

There was still some swelling, the doctor warned, but as he removed the splint and the tape, I caught a glimpse of my new face. It was somewhat surreal.

Surgery was about as uneventful as surgery can be. I woke up a little sick, but my then-boyfriend, now-husband, was able to take me home from the office a couple of hours later. I had two tampon-like gadgets shoved in my nostrils for the first 24 hours, but was able to sleep thanks to the pain medication. Another couple of days with some bandages, I went back to the office for the big reveal just two days before Christmas.

There was still some swelling, the doctor warned, but as he removed the splint and the tape, I caught a glimpse of my new face. It was somewhat surreal. Definitely not Jennifer Grey dramatic, but my reflection was very different than it had been the week prior. I couldn't stop staring and smiling, turning from side to side, no bump obscuring my view, just a straight line down to a lovely end. My new nose was a perfect, glorious, acute angle.

Before and after.
Courtesy of Jenn Morson

As time passed, however, I started to miss my old nose, which seemed so ridiculous to me that I tried to just brush it off. I had spent years looking forward to getting rid of it, after all, and I knew I looked so much better. But I didn't look like me, and that was an unsettling feeling. What had caused me so much angst turned out to be an integral part of my identity. In putting so much emphasis on this one feature, I had neglected to recognize the beauty of imperfection. Sure, I could see it in other people quite readily, but in myself, I had grossly exaggerated a little bump into incapacitating self-consciousness.

Now that I have children and I see that a couple of them have the same nose I had as a baby, I wonder, will they grow up and look like me? Like the old me? What will I tell them when they ask where that nose came from? Will I chicken out and gloss over the details, only partially telling the truth and blame the sliding glass door, or will I own up to my regret?

The plan is the latter. And I hope in this world of nips and tucks, of gossip mags and Kardashians, that my children rebel and stick with their true selves. Hopefully I can be a small yet significant cautionary tale.

Jenn Morson Jenn Morson is a freelance writer in between wrangling her four children as a stay-at-home mom in the ‘burbs of Annapolis, Maryland.
This content is created and maintained by a third party, and imported onto this page to help users provide their email addresses. You may be able to find more information about this and similar content at piano.io
Advertisement - Continue Reading Below
More From Beauty
Give Your Skin a Hydrating Pick-Me-Up With a Mist
Found: Face Washes That Work Miracles on Acne
Advertisement - Continue Reading Below
The Editor-Approved Curly Hair Products You Need
Give Your Skin a Shot of Moisture With This Serum
Our Favorite Perfumes of the Year (So Far)
The Nail Trends for Spring Are All About Optimism
These Shampoos Will Make Your Hair Grow Super Fast
24 Hours With Hailey Bieber
Acne Spot Treatments That Actually Work
Why The Lashify Control Kit Is Worth It