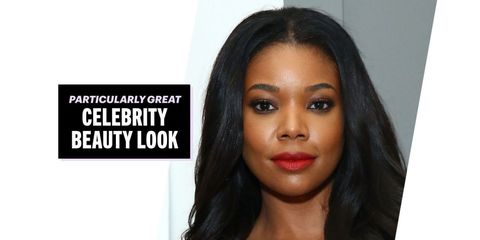 Any publication that thinks we don't just shove our chairs back and hightail it to happy hour wearing our work clothes is just kidding itself, but the Day-to-Night Transition, when it comes to beauty, is very real and very doable.

Even though she *probably* had a MUA on hand to touch her up, Gabrielle Union just crowned herself Queen of the DTNT with one look she easily turned into two over the course of several Men's Fashion Week shows Tuesday. Here's the first, which she wore to the Public School presentation:

We've got some black pencil on the waterlines, a conservative dusting of plummy shadow, long lashes, blush on the apples, and some, shall we say, natural highlighting, courtesy of the New York City humidity. (Told you it can be a good thing.) Now take a look at how she switched it up:

Using Look #1 as a base, she's intensified her eyes with a darker brown shade brought higher up toward the crease, then applied an impeccably lined deep red lipstick. (If they did this in the car on the way over, I'm seriously impressed.)

Now, you could easily just pick one element to zhuzh, but 1) two is much more on trend and 2) it's more fun too—so much so that it can inspire random acts of staring.