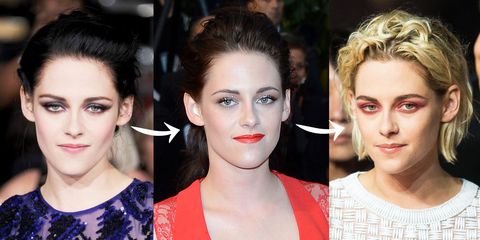 Looking back at your old pictures—even from last year, before you found out about eye-strobing—can be painful but educational. Here, we present an analysis of the small-but-significant ways a few extra years on the circuit and a little more fame can raise your beauty game.

First takeaway: It seems improbable, but a lot of celebs *start out* with a signature look, or at least find one very early on in their careers. This is classic, peak Gwyneth in 1998: lined eyes and nude lips.

Whereas this is glammed-up, movie star Gwyneth.

After all these years, she's gone back to what suits her best—though, this time around, the liner's shadow, not black kohl, and the brows aren't '90s-tweezed.

Wait. This is from 2001? Pretty much the only difference is that the skin coverage could be a bit more polished.

Just as Julia Roberts as ever.

Aww. In 2012, JLaw's still trying to figure out what works for her hooded eyes. (And her bangs.)

Solution: shadow application that concentrates on the outer corners.

Isn't it great watching someone Figure It Out?

Gold tones in 2011 and forever, but see how she's gotten slightly more natural, then more fashion-y?

Still tone-on-tone, but more Instagram-makeup-y, which is kind of an unfair term because she probably did it first.

Prediction: Rihanna still does a monochromatic face but starts focusing more on her eyes.

I suspect Rooney Mara came out of the womb wearing a subtly defined eye and a dark lip. Except here, when she's just starting out, it reads more sweet than goth Givenchy.

Rooney as we know and love her. Only...what's that? The eyebrow pencil with a reddish hue.

With those features and that skin, CB should just go bare-faced 24/7. But in 2005, she's doing that English rose thing, un-darkened brows and and powdery skin finish and all.

Two years later, that rose has browned a little and veered a bit more minimalist.

Now we're back on the pinks, but notice how the skin's dewier than ever? Keep in mind: Moisture is much kinder, especially as we age.

Fundamentally, it's all pretty much the same as it was in 2010: tawny skin and big lashes. But if Blake's beauty evolution were a Tinder profile, it'd be CA >...

...Nouveau California with a Bit of Frenchness

There has been some growth from 2011, see? #thatblush

Hot. The brows are fuller, pretty much any color is gone, and the lashes—which have always been there—are the focal point.

Still in the throes of Disney stardom, so it all makes sense. But even then, she's started doing that upward curve at the outer edges of her eyes.

Bless Hung Vanngo for those (fuller) brows and expertly highlighted skin. The complexion's where you can really see the difference between MUAs' levels of expertise.

Next
5 Lipsticks That Withstand the Pizza Test 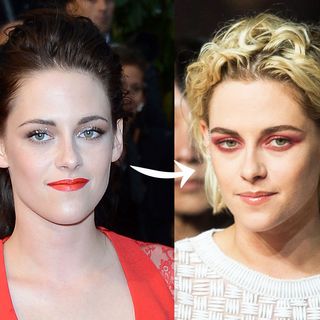 Advertisement - Continue Reading Below
Chelsea Peng I'm Chelsea Peng, the assistant editor at MarieClaire.com.
This content is created and maintained by a third party, and imported onto this page to help users provide their email addresses. You may be able to find more information about this and similar content at piano.io
More From Beauty
What to Buy From Sephora's Spring Savings Event
Snuggling Gives Kristen Bell a Great Sense of Calm
Advertisement - Continue Reading Below
The Ultimate Guide to the DIY Pedicure You Deserve
Jen Batchelor Schedules Self-Care on Her Calendar
Face Masks That Double as Acne Treatments
Behold, Your Skin Type Cheat Sheet
Created for From Marie Claire for Created by Marie Claire for
Neutrogena
Sunscreens That Won't Leave a Cast on Dark Skin
At-Home Laser Hair Removal Devices That Work
Found: Skincare Acids for Darker Skin Tones
Dazzling Makeup Looks From the Spring Runways