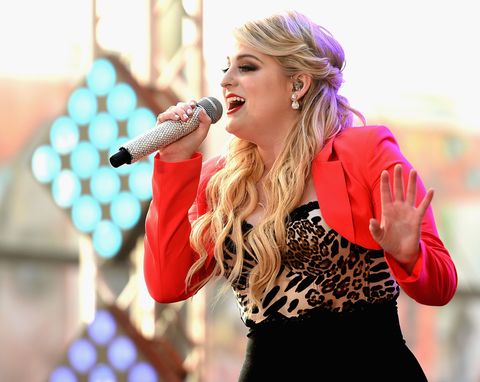 Meghan Trainor's video for "Me Too" dropped on Monday, and was up for just a few hours before being pulled by Meghan herself. In an explanation via Snapchat, the singer said her waist was excessively photoshopped, causing embarrassment and annoyance.

"Hey guys, I took down the 'Me Too' video because they Photoshopped the crap out of me," she explains in the clip below. "I'm so sick of it and I'm over it, so I took it down until they fix it. My waist is not that teeny. I had a bomb waist that night, I don't know why they didn't like my waist. But uh, I didn't approve that video and it went out for the world. So I'm embarrassed."

Meghan also talked about the video on Watch What Happens Live! telling Andy Cohen, "I'm snatched, I've been working out...I love this video so much, so I was so upset because I thought the fans were doing it online when they were screenshot-ing it. I was like, 'What's going on?' And then I saw my video and I was like, 'Oh my god, It's my own video.' So I called the gods of Vevo and I said 'take that down now.'"