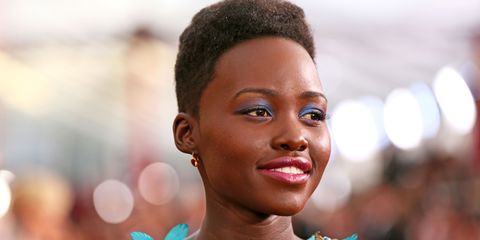 The Academy Award winner has written a devastating op-ed for The New York Times about her relationship with 65 year-old Weinstein.

The article charts how the Kenyan-Mexican Nyong'o met Weinstein whilst finishing her drama degree. She details a set of incidents that sadly mirror many of the accounts we have heard about Weinstein, this time round inviting her to watch a film with his family (his children present) then luring her into another room, requesting massages and undressing, she says:

Harvey led me into a bedroom — his bedroom — and announced that he wanted to give me a massage. I thought he was joking at first. He was not. For the first time since I met him, I felt unsafe. I panicked a little and thought quickly to offer to give him one instead: It would allow me to be in control physically, to know exactly where his hands were at all times. ...He agreed to this and lay on the bed. I began to massage his back to buy myself time to figure out how to extricate myself from this undesirable situation. Before long he said he wanted to take off his pants. I told him not to do that and informed him that it would make me extremely uncomfortable. He got up anyway to do so and I headed for the door, saying that I was not at all comfortable with that. 'If we're not going to watch the film, I really should head back to school,' I said.

Like a lot of the victims of Weinstein's alleged actions, she did not call him out during the incident, aware of his power as well as genuinely thinking the best of him and hoping she read the situation wrong:

'I agreed with an easy laugh, trying to get myself out of the situation safely. I was after all on his premises, and the members of his household, the potential witnesses, were all (strategically, it seems to me now) in a soundproof room.'

The 12 Years A Slave star's article has garnered much respect, partly for eloquently explaining how a young actress could continue to communicate or even be friends with Weinstein after this kind of interaction. She explains how this can be reasoned away after other more charming, public encounters, 'I didn't quite know how to process the massage incident. I reasoned that it had been inappropriate and uncalled-for, but not overtly sexual. I was entering into a business where the intimate is often professional and so the lines are blurred.'

Unfortunately, Weinstein apparently continued pursuing the young actress, inviting her to dinner and essentially suggesting she sleep with him for roles, citing other actresses who had supposedly done the same. She writes:

Before the starters arrived, he announced: 'Let's cut to the chase. I have a private room upstairs where we can have the rest of our meal' I was stunned. I told him I preferred to eat in the restaurant. He told me not to be so naïve. If I wanted to be an actress, then I had to be willing to do this sort of thing. He said he had dated Famous Actress X and Y and look where that had gotten them.

After 'politely' declining Nyong'o swore never to work with him again, and even after persistence from Weinstein, never has.

Since the article has been published much praise has been given to Nyong'o for her closing sentiments, she writes that the rest of her Hollywood experience has been less troubling due to the many great women and men in positions of power.

One of the most important sentences in Lupita Nyong'o's NYTimes Op-Ed about Harvey Weinstein. pic.twitter.com/YFUizgeoGs

She also details why others are afraid to speak up, 'for fear of suffering twice.'

Some people on Twitter have also noted that Nyong'o is the first black woman to come forward with an allegation towards Weinstein. The reaction to Nyong'o's revelation then could be a powerful catalyst for other potential black victims who are yet to come forward.

Hopefully her writing has proved cathartic for the actress and as a rallying cry for the rest of Hollywood, and us.

Weinstein, meanwhile, has checked into rehab and insists that all the alleged sexual encounters were consensual.