Today in things that will traumatize you, James Franco appears to have had some free time on his hands recently, and decided to casually dress up as Jack Nicholson's character from The Shining. You know, in order to traumatize some normals who, frankly, were just minding their own business at Universal Studios' Halloween Horror Night and just didn't know what they were in for, bless their poor hearts.

As you can see in the video above, Franco was joined on this undercover adventure by his The Deuce costar Chris Bauer, who had way more chill. Again, this is what Franco was bringing to the table:

Fact: James Franco recreating The Shining is more scary than the actual Shining. 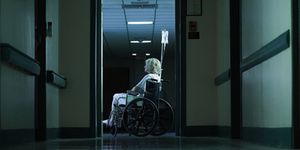 50 Strangest Superstitions
Mehera Bonner Contributor Mehera Bonner is a news writer who focuses on celebrities and royals—follow her on Instagram.
This content is created and maintained by a third party, and imported onto this page to help users provide their email addresses. You may be able to find more information about this and similar content at piano.io
Advertisement - Continue Reading Below
More From Celebrity
Elizabeth Hurley, 55, Shows Off Toned Abs On Insta
Keira Knightley Won't Do Nude Scenes Filmed by Men
Advertisement - Continue Reading Below
Kourtney Kardashian Is Dating Travis Barker
Priyanka Chopra Jonas Talks Her New Memoir
Priyanka and Nick on Their Quarantine Quality Time
Priyanka Pulls Back the Curtain
Sussexes Will Return to Social Media, Harry Said
A-Rod Celebrated J.Lo's Inauguration Performance
The 6 Most Expensive Royal Wedding Dresses
Inside Kitty Spencer's Stunning £19 Million Home