Ashley Judd was one of the first actresses to publicly speak out against Hollywood producer Harvey Weinstein. In a New York Times investigation, she claimed Weinstein sexually harassed her, and her account sparked similar allegations from other actresses, including Gwyneth Paltrow and Angelina Jolie.

In a statement to the Times, Weinstein’s lawyer said “he denies many of the accusations as patently false,” and he told The New Yorker, which published the accounts of several women accusing him of sexual assault, that he categorically denied any claims of non-consensual sex. Weinstein has since been fired from the company he co-founded.

Judd talked to Diane Sawyer for an in-depth interview with ABC News, parts of which are airing on Good Morning America, Nightline, and World News Tonight with David Muir. As the interview began, she appeared visibly emotional. “I didn’t expect that I would feel tearful, but it has been an absolutely, tremendously moving two in a half or three weeks,” she said.

In the interview, Judd details what she calls Weinstein’s sexual harassment, which happened during a meeting in a hotel room. She claims he asked to give her a massage, then asked for her to give him one, and she kept declining. According to her account, he steered her toward a closet, then asked her to watch him take a shower. She allegedly ended up saying she’d reconsider after she won an Oscar in one of his movies, and “fled.”

“Am I proud of that? I’m of two minds. The part that shames myself says no,” she told Sawyer. “The part of me that understands the way shame works says, ‘That was absolutely brilliant, good job kid, you got out of there, well done.’ It’s a very important word, shame, and it’s a very important thing to talk about. So we all do the best we can, and our best is good enough, and it’s really okay to have responded however we responded.” 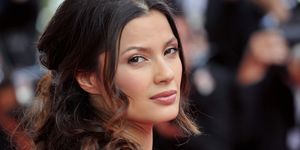 She said she told several people about the alleged encounter, but worried she wouldn’t be believed. And though Weinstein claimed the two were friends, and he even tried to set her up with his brother, she denied they were friends. “That’s deny, attack, reverse the order of offender and victim,” she said.

Later on, she said, she was about to confront Weinstein at an event, and he apparently told her, “You know, Ashley, I’m going to let you out of that little agreement we made.” Judd said she replied, “You do that, Harvey. You do that.” After that moment, Judd claims, “he has spat my name at me every since.” After that, she made two movies with his studio, but says she doesn't recall him being a big presence while filming.

Judd, who also spoke about the problem of sexual harassment in other industries, had some parting words for Weinstein: Though she'll never forgive him, she said she believes "there is hope and help for everyone" as long as they acknowledge what they did wrong. “What I'd say to Harvey is I love you, and I understand that you are sick and suffering, and there is help for a guy like you, too, and it's entirely up to you to get that help," she said.

Watch parts of the Good Morning America segment below:

.@AshleyJudd on Harvey Weinstein encounter: “If I could go back retrospectively with a magic wand...I wish I could prevent it for anyone.” pic.twitter.com/1NbOgJELeM

.@AshleyJudd on Harvey Weinstein: “What I'd say to Harvey is I love you and I understand that you're sick...there's help for a guy like you” pic.twitter.com/3mBkJQ8uMl