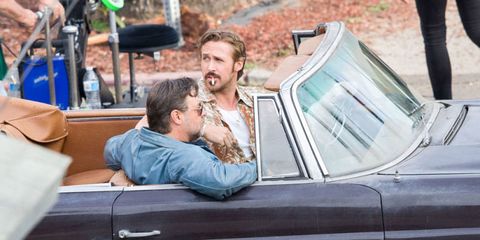 There's probably a rule somewhere that says you're not allowed to hold an Australian awards show without Russell Crowe, so even though the actor is currently filming The Nice Guys in Los Angeles, he still "attended" this week's Australian Academy of Cinema and Television Arts Awards (aka the AACTAs) via satellite. What Australian viewers weren't expecting was Crowe's very sexy Nice Guys co-star Ryan Gosling, who decided to crash his speech. In a navy suit. With retro facial hair. (Hey girl, the movie takes place in the 1970s.)

"Ladies and gentleman, you might not recognize him with his clothes on...Ryan Gosling," Crowe jokingly grimaced, before Gosling launched into his best "Australian accent," which included your token "G'day." "It's okay, I'm honorary Australian," he deadpanned. "I lived in New Zealand for like, two years."

Busy filming, a new dad, and still finding the time to be SO SILLY. And hot.

Ryan Gosling is In Denial About His Sex Appeal

Victoria Dawson Hoff Associate Editor Victoria Hoff is the associate editor at ELLE.com, covering everything from fashion to beauty to wellness.
This content is created and maintained by a third party, and imported onto this page to help users provide their email addresses. You may be able to find more information about this and similar content at piano.io
Advertisement - Continue Reading Below
More From Celebrity
Zaya Wade Freaked Out Chatting With Michelle Obama
Harry & William Won't See Eye-to-Eye Any Time Soon
Advertisement - Continue Reading Below
Jennifer Lopez Stuns in a Little Black Mini Dress
Harry & Meghan Won't Throw the Queen Under the Bus
Harry & Meghan Have Nothing to Lose in Oprah Chat
How to Watch Meghan and Harry's Oprah Interview
Gigi Hadid Dyed Her Hair Red
How Celebrities and Friends Are Supporting Meghan
Meghan Didn't Need Prince Harry to Be Wealthy
Pregnant Emma Stone Runs Errands in Santa Monica