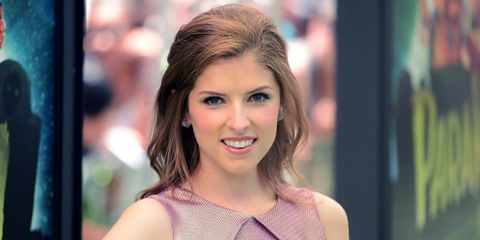 She sings, she acts, she lip-syncs, and now she writes books. On Thursday, Touchstone Books announced that Anna Kendrick will publish a "collection of humorous autobiographical essays" to be released in the fall of 2016. According to The Hollywood Reporter, the book will cover everything from Anna's childhood in Maine to the shenanigans she's experienced since becoming a bona fide Famous Person.

"I'm excited to publish my first book, and because I get uncomfortable when people have high expectations, I'd like to use this opportunity to showcase my ineptitude, pettiness, and the frequency with which I embarrass myself," Anna said in a(n adorable) press release. "And while many of my female inspirations who have become authors are incredibly well-educated and accomplished comedy writers, I'm very, very funny on Twitter, according to BuzzFeed and my mom, so I feel like this is a great idea. Quick question: are run-on sentences still frowned upon? Wait, is ending a sentence with a preposition still frowned upon? I mean, upon frowned? Dammit!"

CAN WE PRE-ORDER YET?!

Patti Smith Is Writing Another Memoir, Will Be Your Roadmap to Life