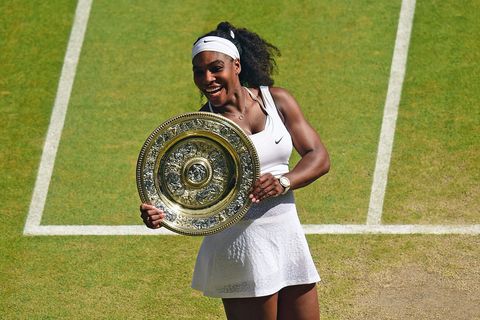 There's a reason why many consider Serena Williams to be the best female tennis player in the history of the sport. Today, Williams defeated Spain's Garbine Muguruza in the Wimbledon's women's final with a score of 6-4, 6-4 for the big win.

This marks her sixth Wimbledon victory, and more importantly, her fourth consecutive Grand Slam title—or the "Serena Slam" as it's come to be known—after taking home the titles at last year's U.S. Open, and the Australian and French Opens earlier in 2015. Williams accomplished this once before, twelve years ago.

Serena Williams will have the chance to make history again this September at the U.S. Open. If she proves victorious, she will be the first tennis player to win all four majors in a single calendar year since Steffie Graf set the record in 1988. Plus, she'll match Graf's top trophy count of 22 Grand Slam titles.

But for now, it's time for Williams to ~celebrate~.

Sarah Lindig Senior Digital Editor, Special Projects Sarah Lindig is the senior digital editor, overseeing special projects for Harper's Bazaar.
This content is created and maintained by a third party, and imported onto this page to help users provide their email addresses. You may be able to find more information about this and similar content at piano.io
Advertisement - Continue Reading Below
More From Celebrity
28 ‘Real Housewives’ Who Left The Franchise
Queen Elizabeth Fun Facts
Advertisement - Continue Reading Below
Celebrities Who Don't Use Their Real Names
63 of the Shortest-Lived Celeb Marriages
26 Stars Who Appeared On '90s TV Shows
Your Guide to the Current Royal Line of Succession
Watch Prince Harry's Interview with James Corden
Meghan Has an Adorable Nickname for Harry
Harry Revealed Archie's Impressive First Word
Harry Said the Press Was Ruining His Mental Health