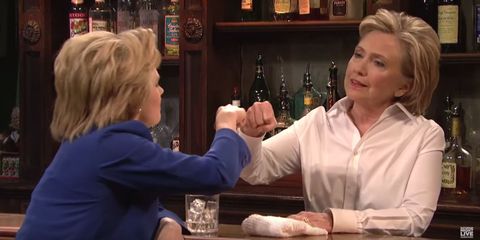 The democratic front-runner rallied her latent comedic skills for her cameo alongside SNL cast member Kate McKinnon. The real Clinton, as Val the bartender, played off McKinnon's doppelgänger Clinton, proving once and for all that she does indeed have a sense of humor about herself (because she's cool like that, remember?)

A vote for Hillary is a vote for four more years of Kate McKinnon's impression.

Even better than Clinton's newly revealed aptitude for self-effacing humor: her killer impersonation of Donald Trump. Which was *almost* as good as Taran Killam's.

Watch the clips below: