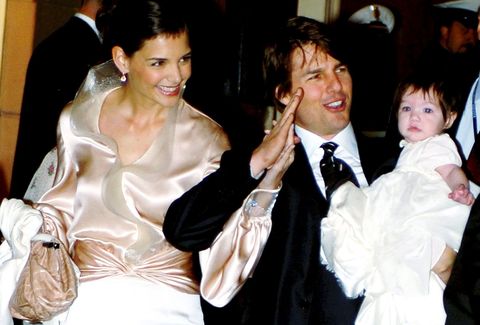 Leah Remini is telling all about growing up in the Church of Scientology in a new memoir, and so far, she's spilled details about Tom Cruise, Katie Holmes, and the bizarre world of being a child in the secretive organization. The New York Daily News obtained a copy of the book before it hits stores, and things get even crazier.

Remini writes that she heard a crying baby while she was at a fancy dinner before Cruise and Holmes' wedding, and after five minutes, she decided to figure out where it was coming from. She found a 7-month-old Suri Cruise in a bathroom, where she was laying on the floor. Three women, including Cruise's sister and his assistant, were apparently just looking at her like she was "[Scientology founder] L. Ron Hubbard incarnate." Remini says she eventually convinced them to give her some milk.

During the actual wedding, Remini claims Holmes left Cruise waiting at the altar for 20 minutes, and then they both snubbed her on the reception line. Later on, she says she saw a prominent Scientologist "humping Brooke Shields" on the dance floor.

And according to Remini, there was drama with Cruise's other children, too. She says she got a ride to the airport with Bella and Connor, Cruise's adopted kids with ex-wife Nicole Kidman. When Remini asked if they had seen their mom lately, Bella apparently retorted, "Not if I have a choice. Our mom is a f—ing SP." SP stands for Suppressive Person, a person considered an enemy of Scientology and cut off from their loved ones in the church. Remini herself was named a Suppressive Person a few years ago.

The Church of Scientology responded to that claim with a statement: "We have never heard Ms. Remini's claim and do not believe it. The Church and Ms. Kidman have responded in the past to false claims that there was anything wrong with Ms. Cruise's relationship with her mother."

Remini told ABC News that Holmes later filed an official complaint against Remini for rude behavior that she claimed ruined her wedding. The behavior may have included asking where church leader David Miscavige's missing wife, Shelly, was. Holmes' complaint apparently led to a six-figure fine, and Remini was forced to apologize personally to several guests. Holmes responded to 20/20 with a brief statement: "I regret having upset Leah in the past, and wish her only the best in the future."

Of course, the church completely discredits Remini's accounts, calling them "not only untrue, but ridiculous and stupid." In a statement, the church continued trashing her, saying, "as a note, every guest but Ms. Remini respected the couple's privacy by not speaking about it afterward. That in itself describes what kind of person Ms. Remini is: self-absorbed, rude and embarrassing, all traits she displayed as a guest of this event according to parishioners who attended."