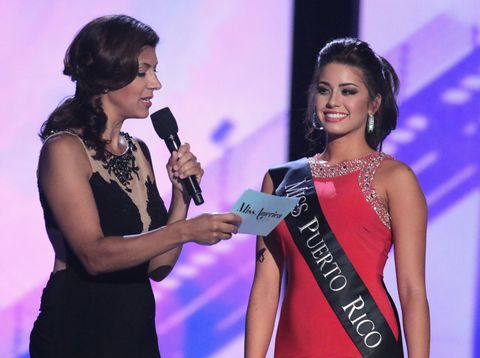 Miss Puerto Rico Destiny Vélez has been suspended indefinitely from her pageant duties following an anti-Muslim Twitter rant.  The Huffington Post reports Puerto Rico's official Miss America organization released a statement on Saturday in response to the firestorm of controversy her online remarks touched off.

Vélez's comments started as a response to a photo and hashtag filmmaker Michael Moore posted on Twitter. Moore posted a photo of himself next to Trump Tower hashtagged #weareallmuslim and encouraged others to post similar images with the same sign.

According to the Latin Times, which recorded Vélez's tweets before her account was deleted, she tweeted several messages to Moore and others. "All what Muslims have done is provided oil and terrorize this country & many others!" she wrote in one tweet. "All they do is build their mosques, feel offended by American values and terrorize innocent Americans and plant gas stations."

In a statement announcing her suspension, The Miss Puerto Rico organization said Vélez's words "do not represent the integrity and esteem of our program, nor that of our board members, our sponsors and partners, or the National Organization."

In the same statement, Vélez, who was accused of being a bully online, also offered an apology for her comments: