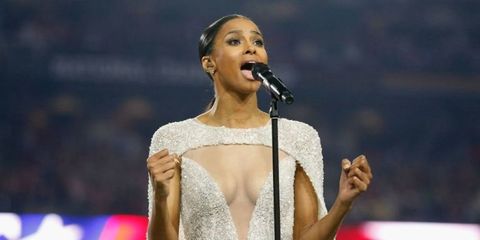 Ciara just delivered a stunning performance of the National Anthem before Monday night's College Football Championship game. This should be a time for everyone to talk about what an incredible job she did tackling a hard song, but because Ciara is a woman in public, people have to attack how she is dressed and shame her for having breasts. Of course.

But because there is a small visible portion of her cleavage, Ciara is destroying society and scarring children for the rest of their lives. At least, according to these people.

Dear Ciara. You're stunning. But this is a National Championship Game. Kids are watching. Cover up.

UGH. *Rubs forehead at yet another pointlessly sexist tweet that stupidly blames women for being objectified.*

Appropriate, fair tweet. The dress was inappropriate. Her voice was more than enough. Why distract w/nudity? https://t.co/Fv93ioO7TM

What "nudity" is he even talking about? Unless I'm mistaken, that triangle cleavage-y thing is even covered up by sheer fabric. There's nothing shocking or scandalous about that dress unless you are an Amish nun who has never seen the human body, ever.

This guy has a three-year-old who knows how to use "inappropriate" correctly in a sentence but calls breasts "bumps."

When Ciara was singing National Anthem, Coop, our 3-yr-old daughter said, "I can see her bumps. That dress is inappropriate."

Ciara, I'm sorry, but IMHO your dress was inappropriate for our National Anthem. #CollegeFootballChampionship

#cfb_championship Can Ciara's dress be more see through for national anthem?

Ciara has her boobs hanging out as she sings National Anthem at Nat'l Championship game....bit inappropriate

So let's get this straight—it's "inappropriate" (according to a three-year-old and some other football fans) for a woman to be seen showing cleavage a sporting event but not for grown men to beat each other violently for a few hours to win a trophy? OK.

Not everyone was buying that, though.

@BonnieBernstein ummm...but kids, when you go to the beach this summer, cover your eyes. There are bikinis there...

*Sees the dress Ciara wore for the national anthem* She looks "covered up" to me. What's wrong with people pic.twitter.com/n5edFolu0v

Anyone that says @Ciara's dress was inappropriate is jealous they can't pull it off. She just slayed that outfit (and the national anthem).

Meanwhile, none of those people seemed to have a problem with all the cheerleaders dressed like this:

Which, again, no one should have a problem because there's nothing harmful or dangerous to kids or anyone else about these outfits.

Ciara, meanwhile, is enjoying every moment of her time at the event.

Truly Grateful For This Moment, and To Be A Part Of A Special Night #NationalChampionship #BamavsClem
🇺🇸 pic.twitter.com/TjWN5Gc5Ad

This has been your daily reminder that women's breasts will not destroy the world, no matter what angry people on Twitter try to tell you.