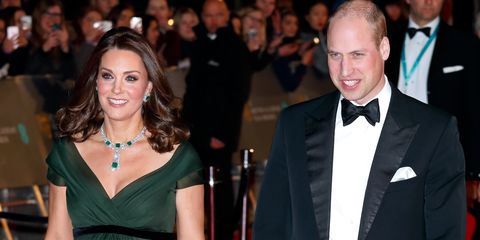 Prince William and Kate Middleton made the 2018 BAFTA Awards a royal affair—not that that's anything new. The Duke and Duchess are frequent attendees of the event, which honors the best British and foreign films of the year. This year's show took place at Royal Albert Hall and drew a range of celebrity attendees.

As usual, the couple looked incredible:

Notably, Kate chose not to wear all-black to the event, even though many women chose to do so as a show of support for the #TimesUp movement. Of course, it's important to note that Kate was in a lose-lose situation when it came to choosing her BAFTA dress this year. Even if she wanted to support #TimesUp, it would break royal protocol for her to openly make a political statement.

In the end, Kate opted for a very dark green gown with a black belt:

Before the BAFTA awards, Daily Mail correspondent Victoria Murphy predicted that Kate would opt for a compromise.

"My guess on this is that Kate will wear a dress that is black with some coloured/metallic detail," she tweeted. "That way she is unlikely to be accused of being too political or of ignoring the cause."

The description is fairly similar to what Kate actually wore to the 2017 BAFTA Awards:

Inside the show, Kate and William basically look like big kids who can't contain their joy. In their defense, they're surrounded by most of the biggest celebrities in the world, and who wouldn't be a little starstruck?

Kayleigh Roberts Contributor Kayleigh Roberts is the weekend editor at Marie Claire, covering celebrity and entertainment news, from actual royals like Kate Middleton and Meghan Markle to Hollywood royalty, like Katie Holmes and Chrissy Teigen.
This content is created and maintained by a third party, and imported onto this page to help users provide their email addresses. You may be able to find more information about this and similar content at piano.io
Advertisement - Continue Reading Below
More From Best of the Red Carpet 2021
Alan S. Kim Channeled David Rose at the Oscars
The Best Red Carpet Looks at the 2021 Oscars
Advertisement - Continue Reading Below
The Best-Dressed Celebs at the 2021 SAG Awards
The Best Red Carpet Looks at the 2021 Grammys
The Chicest Golden Globes Looks From IRL and Home
50 Celebrities on Their Very First Red Carpet
The Best Looks of the Oscars After-Parties
Did You Spot Charlize Theron's Hidden Hair Detail?
Timmy Photobombed Margot on the Oscars Red Carpet
Leonardo DiCaprio's Oscars Date Is...Not His Mom