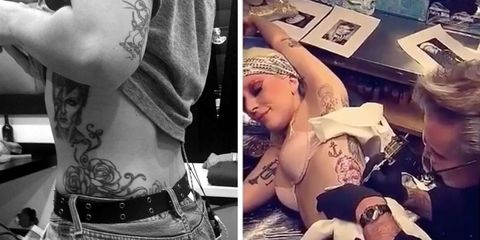 Being an unconventional woman, Lady Gaga has been gearing up for tonight's Grammy Awards, where she will pay tribute to David Bowie with a special performance, in an unconventional way. Just days before the awards show, Gaga got a new tattoo of Bowie's face as pictured on his Aladdin Sane album cover.

Gaga documented the process on Snapchat. She looked peaceful while the tattoo artist got to work.

"This was the image that changed my life," she wrote in one snap, where she showed off the large tattoo.

Her performance tonight "is going to be a true homage to who David was, particularly musically, but not ignoring his influence on fashion and pop culture in a broader way," Grammys producer Ken Ehrlich told the New York Times when the tribute was announced.

If Bowie's influence on Gaga was ever in question, it's now been confirmed and marked permanently on her body in a beautiful way.