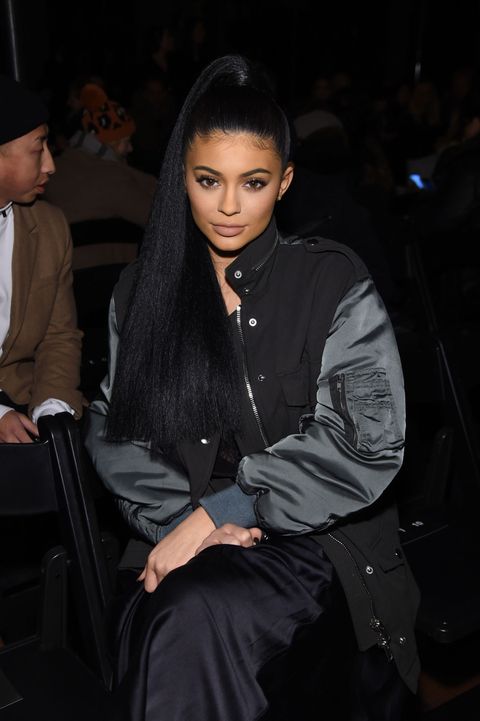 According to a new report, a Kylie Jenner Puma collaboration is a go, despite a ton of drama surrounding it in the last few days.

A week ago, US Weekly reported that Kylie had signed a seven-figure contract to be the new face of Puma. The outlet, which quoted unnamed sources, said the partnership would not be "full out like Rihanna's collaboration." (Rihanna just showed her Fenty x Puma line at New York Fashion Week.)

Kylie excitedly posted on Instagram a photo of a puppy laying in the sun with the caption" Mood," to announce the new deal. She deleted the photo, and then her brother-in-law Kanye West took to Twitter to say the deal would never happen. Of course, Kanye's has been working with Puma competitor Adidas for three seasons.

But now, sneaker blog NiceKicks.com is saying they have confirmation that the deal is still on.

"Today at Agenda Las Vegas, while stopping by the Puma booth at Liberty Fairs, we were able to confirm that the Kylie Jenner PUMA partnership is in fact a go," the outlet reported, adding that photo shoots with Kylie have already taken place as well.

Kate Storey Esquire Writer-at-Large Kate Storey is a Writer-at-Large for Esquire covering culture, politics, and style.
This content is created and maintained by a third party, and imported onto this page to help users provide their email addresses. You may be able to find more information about this and similar content at piano.io
Advertisement - Continue Reading Below
More From Celebrity
Jennifer Lopez and Ben Affleck: Everything We Know
Harry & Oprah's Mental Health Doc Has a Title
Advertisement - Continue Reading Below
Serena Williams Might Miss the Tokyo Olympics
Jennifer and Ben Have "Unreal" Chemistry Together
The Sussexes Marked Archie's Bday in a Lovely Way
Queen's Cousin Accused of Selling Access to Putin
Meghan Wore a Meaningful Necklace for Vax Live
How Celebrities Are Celebrating Mother's Day 2021
Gabrielle and Kaavia's Mother's Day Pic is So Cute
Ben Affleck's Moving Tribute to Jennifer Garner