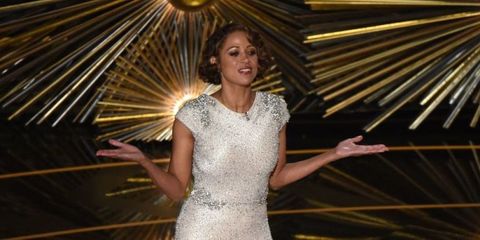 In Chris Rock's gifted hands, the Academy Awards have so far been heavy on the #OscarsSoWhite jokes. That's one reason it was a shock when he brought out Stacey Dash, Fox News commentator and vocal critic of the Oscars boycott, Black History Month, and BET. Chris introduced her as the new "director of our minority outreach program," to which Stacey replied, "I cannot wait to help my people out. Happy Black History Month!"

Stacey seemed to anticipate that people might not understand why she was there, and tweeted out a blog post about herself almost as soon as her bit was over. "You might be watching the Oscars and wondering why someone named Stacey Dash just walked across the stage," she wrote. "Well, I'm Stacey—with an 'e'—and it's nice to meet you." She then goes on to say she believes in the importance of diversity in Hollywood with respect to both race and politics, and says "ideological diversity is much harder, because it forces everyone to come face to face with actual beliefs."

"Who is Stacey Dash" and why did I just walk across the #Oscar stage? https://t.co/MPzbmpDs72 @ChrisRock

Eliza Thompson senior entertainment editor I’m the senior entertainment editor at Cosmopolitan.com, which means my DVR is always 98 percent full.
Advertisement - Continue Reading Below
More From The Oscars 2020
Twitter Is Livid Over J.Lo Not Getting Oscar Nom
Wells Adams and Sarah Hyland at the Oscars
Advertisement - Continue Reading Below
Bradley Cooper's Ex-Wife Comments on Gaga Drama
Bradley Cooper & Irina Shayk's Body Language
Did Bradley Cooper Skip the Oscars After-Party?
Ciara Debuts a Gorgeous Bob With Wispy Bangs
Kendall Jenner's Oscars Dress Was Nearly-Naked
Priyanka Chopra and Nick Jonas at the Oscars Party
Angela Bassett, We Are Not Worthy
The Most Awkward Moments from the 2019 Oscars