Traditionally at the Academy Awards, the previous year's winners for Best Actress and Best Actor present this year's Oscar to the new guard. But in the case of Casey Affleck, the Academy is breaking tradition. 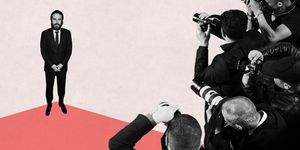 Why the Oscars Should Ignore Casey Affleck

Per Variety, Affleck is skipping the Oscars to "avoid becoming a distraction due to two sexual harassment lawsuits he previously settled with the producer and cinematographer of his 2010 film I’m Still Here."

This means the Academy had to find someone to replace him—or, rather, make that two someones: Jennifer Lawrence and Jodie Foster will announce the Lead Actress award on Sunday night. (FYI, Jane Fonda and Helen Mirren will present Lead Actor.)

The move comes after an eventful year for Hollywood, with actresses leading the #TimesUp movement in order to provide legal support to women who have experienced sexual harassment at work. The Oscars will carve out a moment during the ceremony to highlight the work of #TimesUp, but the exact plans are still unknown.

Related Story
The Chicest Looks from the 2018 Oscars Red Carpet
Mehera Bonner Contributor Mehera Bonner is a news writer who focuses on celebrities and royals—follow her on Instagram.
This content is created and maintained by a third party, and imported onto this page to help users provide their email addresses. You may be able to find more information about this and similar content at piano.io
Advertisement - Continue Reading Below
More From The Oscars 2021
See Adele's Perfect Oscars After-Party Look
Emrata Wore the Most Emrata Outfit to Oscar Party
Advertisement - Continue Reading Below
J.Lo Outshone Everyone at the After Parties
Please Look at These Brad and Regina Photos
Chrissy Wore a Mint Dress With a High Slit
Jennifer Aniston Saved Her Best LBD for Last
Did You Spot Charlize Theron's Hidden Hair Detail?
Billie Eilish's Reactions Made the Oscars
Timmy Photobombed Margot on the Oscars Red Carpet
Elizabeth Banks Rewore Her 2004 Oscars Dress