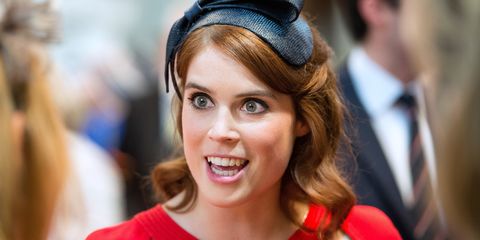 Princess Eugenie, the daughter of Prince Andrew and Sarah Ferguson, has become the first member of the royal family to launch a personal Instagram account.

In an unprecedented move, the 27-year-old made her debut on the social media platform in celebration of International Women's Day.

For her first post, the royal shared a short clip from the WE Day charity concert, held at London's SSE Arena, where she gave a candid speech on her childhood diagnosis with Scoliosis.

And in the caption, Princess Eugenie announced that she will continue to use the digital platform to "share the causes, passions and people close to my heart."

The royal then took to her new social media account to give a more personal insight into life with husband-to-be Jack Brooksbank by sharing a never-before-seen candid from the couple's series of engagement portraits.

And she took the opportunity to showcase her playful side with the caption: "Think Jack said something funny!"

In a matter of days, the royal has already garnered over 13,000 followers but is Princess Eugenie's account a breach of royal protocol?

After Kensington Palace announced the news of Prince Harry and Meghan Markle's engagement, the former Suits actress deleted all of her personal social media accounts.

In fact, while they were dating, the 36-year-old hinted at a future with the royal after deciding to shut down her blog, The Tig.

But could Princess Eugenie's Instagram debut suggest that cousins Prince Harry and Prince William are soon to set up their own personal accounts? Keep everything crossed!

This content is created and maintained by a third party, and imported onto this page to help users provide their email addresses. You may be able to find more information about this and similar content at piano.io
Advertisement - Continue Reading Below
More From Celebrity
Gigi Hadid Says She Voted With Her BB
Will Asked His Uncle to Talk to Harry About Meghan
Advertisement - Continue Reading Below
Why the Queen Denied Meghan's Wedding Tiara Pick
Will & Harry's Reactions to Their Parents' Divorce
LOL, Kelly Ripa Comments on Her Hubby's Bulge 🍆
Adele Talked About Her Weight Loss on 'SNL'
J.Lo Steps Out in the Perfect Autumnal Look
Harry & Meghan's Drama Won't Be on 'The Crown'
Will's Talk with Charles That Led Him to Kate
The Queen Saved Will from a Breakdown as a Teen