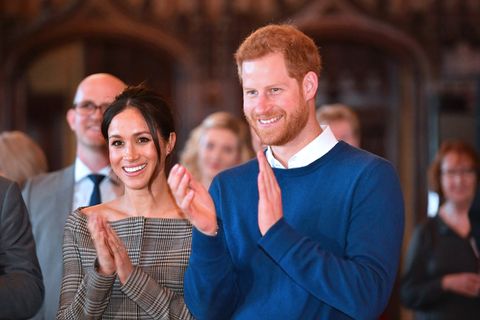 Queen Elizabeth isn't the only member of the royal family who has binged The Crown on Netflix. Prince Harry and Meghan Markle have also seen the show, according to royal expert Katie Nicholl.

In her new book, Harry: Life, Loss, and Love, Nicholl describes Harry and Meghan's very normal date nights in, which include eating homemade dinners and binging Netflix shows. So, you know, if you change "homemade dinners" to "Postmates," Harry and Meghan basically have the same life as the rest of us...right?

"An accomplished cook, Meghan loved to make extravagant dinners for Harry, and they enjoyed staying in and eating her delicious homemade meals and watching films and TV shows like The Crown on Netflix," Nicholl wrote in an excerpt published by the New York Post.

Nicholl also revealed that Meghan felt at home right away in Harry's home at Nottingham Cottage and wasted no time putting her stamp on the former bachelor pad.

"She was so at home at Nottingham Cottage that she had a wardrobe of clothes in Harry’s closet and had flown several more suitcases of belongings over. She referred to Kensington Palace as 'home,' and there were reports in the press that she had unofficially moved in with Harry," Nicholl wrote. "She had certainly transformed Nottingham Cottage, tastefully adding some feminine touches to the bachelor décor, including fresh flowers, organic cookbooks and her favorite Le Labo Santal 26 scented candles."

So, basically, it was no surprise when the couple got engaged. The couple who Netflixes together stays together.

Prince Harry and Ms. Meghan Markle have chosen to release this official portrait photograph to mark their engagement. The photograph was taken by photographer @alexilubomirski earlier this week at Frogmore House, Windsor.